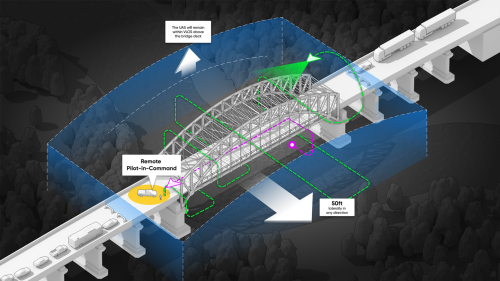 On the heels of a nationwide tactical beyond visual line of sight or BVLOS waiver, issued by the Federal Aviation Administration in August, the North Carolina Department of Transportation received a BVLOS waiver to fly Skydio drones to inspect roadway bridges.

[Above graphic via Skydio.]

According to a blog post by Brendan Groves, head of regulatory and policy affairs at Skydio, the waiver means the NCDOT can use drones for bridge inspection operations without the use of visual observers or surveillance technology such as radar.

“Going forward, NCDOT’s inspectors — who face the daunting task of inspecting more than 13,500 bridges on a regular basis — can send drones below bridges instead of dangerous rappels or expensive and invasive snooper trucks,” Groves said. “Although today’s waiver focuses on NCDOT, it signals the FAA’s willingness to permit advanced BVLOS operations within procedural parameters that account for lower levels of airspace risk near structures, a concept known as infrastructure masking.”

Groves noted that there are more than 600,000 bridges in the United States – with North Carolina home to more than 13,500 bridges – and federal and state laws require regular inspections of them.

“Few jobs are more important — or more demanding — than inspecting bridges. In order to inspect the critical infrastructure below the deck of the bridge, highly trained inspectors conduct daring feats — repelling over the edge or dangling below in the bucket of a snooper truck,” he said.

With this new waiver – which took six months to craft and win approval – Groves said NCDOT is adopting a “performance-based approach” that allows it to conduct drone BVLOS operations. Key features of the waiver include: