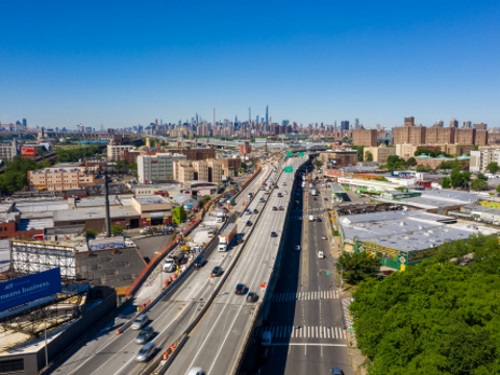 [Above photo by the NYS DOT.]

First, a report by the Transportation, Equity, Climate and Health or TRECH project headed up by Harvard University analyzed the potential benefits of GHG reduction efforts being considered by the Transportation Climate Initiative – a regional coalition of 12 Northeastern and Mid-Atlantic states, along with the District of Columbia, that is expected to finalize a memorandum of understanding this fall.

According to a statement, the TRECH project report said the estimated health benefits from changes in active mobility and on-road emissions under the TCI policy scenarios include up to about 1,000 deaths avoided and nearly 5,000 childhood asthma cases avoided annually, if full implementation of those policies occurs in 2032.

Furthermore, the “monetized value” of the subset of total health benefits included in the report are “larger than the estimated annual TCI program proceeds in 2032” under all of the TCI policy scenarios.

The TRECH Project added that its analysis “does not include climate-related health benefits and other potential health benefits from improving transportation systems” such as those from reduced traffic congestion and noise pollution as well as improved traffic safety and access to jobs, healthcare, and education.

However, a separate study conducted by the Brookings Institution cautioned that there are major “decarbonization challenges” when it comes to transitioning medium- and heavy-duty vehicles away from petroleum-based fuels and propulsion systems, which generate large amounts of carbon emissions.

“The degree of difficulty in decarbonizing transport varies across the sector. Electrification is relatively easy for smaller vehicles that travel shorter distances carrying lighter loads,” the organization noted in a statement.

“For these vehicles, the added weight of a battery is less of a hindrance and the inherently simpler and more efficient electric motor and drivetrain make up for some of the weight penalty,” the group said. “However, the heavier forms of transportation are among the fastest growing, meaning that we must consider solutions for these more difficult vehicles as well.”

The Brookings Institution noted in its report that while “technology exists to decarbonize the heavy transport sector,” many of those advanced technologies “are expensive and not proven at scale.”

“The COVID-19 pandemic adds a degree of difficulty, since it is unclear how it may shift demand and consumer preferences in transport,” the group noted. “For example, consumers may remain reluctant to use urban public transport, and shorter supply chains may be attractive to businesses seeking to become more resilient in the face of a global disruption.”