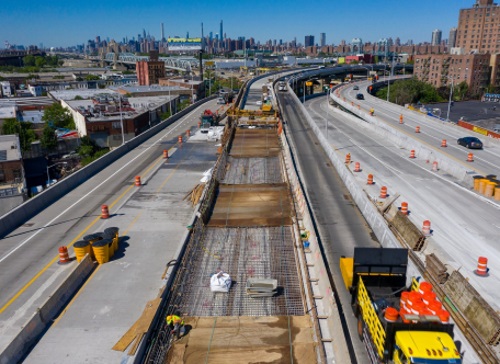 [Above photo by the NYS DOT.]

“As 2020 draws to a close, some transportation indicators like vehicle miles traveled (VMT) are trending back to pre-COVID levels,” the firm noted in its new 22-page report. “But … looking closer, we are seeing a shift to an entire ‘new normal’ for transportation.”

StreetLight based its study on an examination of VMT data from five major U.S. metropolitan areas – New York, Los Angeles, San Francisco, Washington D.C., and Chicago. It found that instead of the typical sharp increase in morning travel, followed by a drop and then an afternoon peak, VMT data now indicates weekday traffic builds gradually toward a more sustained afternoon high.

That is in part because “millions of commuters no longer head to a distant office in the morning, so they have new flexibility for mid-day grocery shopping and other in-person errands as more businesses gradually reopen their doors,” the firm said.

It also referenced a PricewaterhouseCoopers Remote Work Survey that found 77 percent of U.S. office employees are currently working from home at least one day a week, with 55 percent projected to continue doing so once the COVID-19 crisis passes.

Additionally, while major metro areas still have peak evening commutes, those peaks aren’t as pronounced as they used to be. In Washington D.C., for example, the analysis shows a slightly earlier peak for evening travel than during the same period in 2019, but the buildup to that point is a steady increase instead of a sudden jump.

StreetLight also noted the formation of “mini rush hours” in some metro areas, such as that Los Angeles and San Francisco, occurring after lunch and then followed by two evening traffic peaks that feature longer yet light periods of traffic congestion. That evening congestion is beginning earlier, the firm noted, yet ending sooner with freeways returning to normal traffic loads as much as an hour earlier versus the same periods in 2019.

The report also noted that all five metros within the study feature this “peak-spreading” tendency, with more vehicle travel during midday than in 2019. StreetLight added that it validated this behavior shift against permanent counter data from state department of transportation sources, with similar “peak-spreading” changes occurring in the morning.

The study also focused on several long-term trends that may develop from those commuting traffic pattern changes: