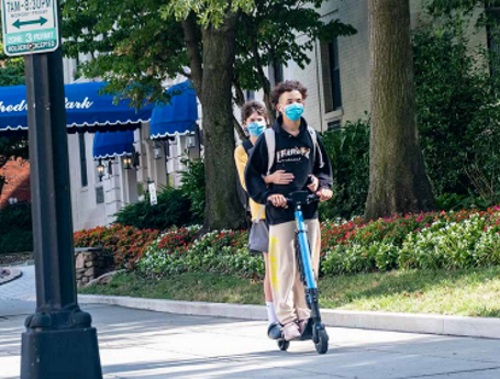 A new report issued by the Insurance Institute for Highway Safety finds that among electric scooter or “e-scooter” riders who sustained injuries, nearly three out of five sustained their injuries while riding on the sidewalk — and about a third of these riders got those injuries in places where sidewalk riding is prohibited.

Only about one out of five suffered injuries while riding in bike lanes, on multi-use trails, or other off-road locations, IIHS noted.

The IIHS study also found that only about a quarter of those injured riders were using e-scooters to commute to work, with the rest injured running errands or riding for fun.

The group noted in a statement that its researchers interviewed more than 100 e-scooter riders whose injuries brought them to the emergency room at George Washington University Hospital in Washington, D.C., between March and November 2019.

One study examined how the severity of their injuries varied according to where and how they attained them, while a second one compared rider demographics, usage patterns, and injuries to those of 377 bicyclists interviewed as part of an earlier study.

“We didn’t see many e-scooter crashes with motor vehicles, and that may be a result of riders sticking mostly to the sidewalk,” explained Jessica Cicchino, IIHS vice president for research and the lead author of those two studies. “On the other hand, there are legitimate concerns that sidewalk riders could crash into pedestrians.”

Broadly speaking, the researchers said they found e-scooter riders suffered injuries more frequently per mile traveled than bicyclists, while bicyclists were three times as likely as scooter riders to be hit by motor vehicles.

Moving vehicles accounted for only 13 percent of the injuries to e-scooter riders, compared with 40 percent for bicycles, according to the IIHS report. By contrast, e-scooter riders were twice as likely as bicyclists to get injured because of a pothole or crack in the pavement or other infrastructure like a signpost or curb, the report said.

“The picture is still not clear when it comes to where scooters should be ridden,” Cicchino added. “Our results suggest that moving scooters off the sidewalk could put riders at risk of more severe injuries, but as things stand they might be suffering these lesser injuries more often.”

The Governors Highway Safety Association issued its own report on e-scooter safety and echoed the IIHS report’s findings in finding that e-scooter riders “prefer using bike lanes” and are more likely to use the sidewalk if such lanes are not available.

The group added that investments in infrastructure, such as protected bike lanes, could help provide safer travel spaces for bicyclists and e-scooter riders alike, reducing the potential for crashes with motor vehicles and pedestrians.

The GHSA added in a statement that the number of trips on shared micro-mobility devices – pedal-powered and electric bicycles or e-bikes, e-scooters, and other small transportation devices – jumped to 136 million in 2019, a 60 percent increase over the previous year.

“As trips have increased, so too has the potential for crashes, with hospitals reporting triple digit spikes in e-scooter injuries and hospital admissions,” the group said.