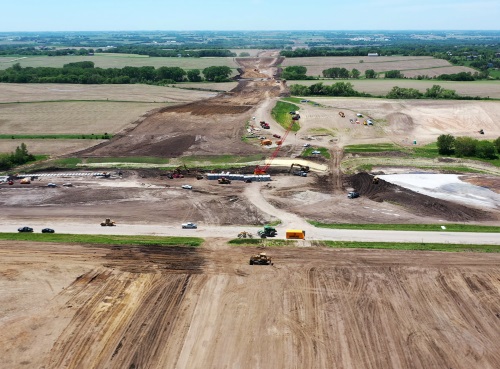 The Nebraska Department of Transportation hosted an event on October 8 to celebrate progress on the $352 million Lincoln South Beltway project to connect U.S. Highway 77 and Nebraska Highway 2.

[Above photo by the Nebraska DOT.]

Construction on the project began this summer and should be completed by spring of 2024 – four years ahead of schedule – due to “innovative engineering and financing” approaches deployed by the Nebraska DOT to speed up construction while still retaining an eight-year payment time frame.

“The Lincoln South Beltway has been talked about since the late ‘60s because of its potential to improve mobility, safety, and help grow Nebraska,” noted Governor Pete Ricketts (R) in a statement.

“The passage of the Transportation Innovation Act, along with continued innovative approaches from the Nebraska DOT helped move this project forward,” he said. “These initiatives, along with Senator [Deb] Fischer’s Build Nebraska Act and extensive partnership with our [state] Federal Highway Administration officials, helped us reach this point.”

“The people who got us here today come from all over our agency [and include] many more people who played key roles in getting this work accomplished,” added Kyle Schneweis, Nebraska DOT’s director.

“I’m so proud to be a part of this team – the work they’ve accomplished to get us here is simply outstanding,” he said. “But we couldn’t have done it alone. We have so many to thank, including Governor Ricketts, our FHWA partners, state legislators, [plus] the City of Lincoln and Lancaster County.”

Schneweis also emphasized that “the work has just begun and we have a long way to go” on the Beltway project.

“We look forward to coming back here in a few short years to celebrate the beltway completion and all the benefits it provides to our transportation system and the citizens of Nebraska,” he added.