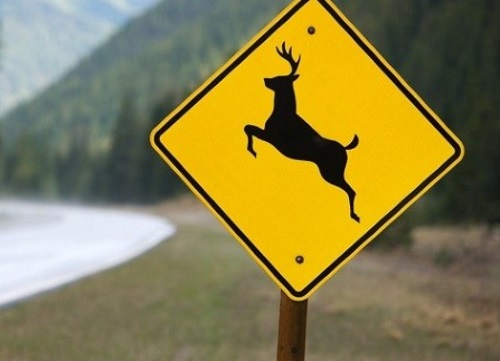 [Above photo by the Allstate Insurance Co.]

The agency said in a statement that North Carolina’s ongoing population growth, resulting in more home development activity and vehicular traffic, is partly responsible for the increase. The NCDOT noted that more development in particular pushes animals — primarily deer, which account for about 90 percent of all animal-related crashes — into more opportunities for a dangerous encounter with vehicles.

The agency added that October, November, and December are the months with the highest likelihood for such crashes, accounting for half of the annual total over the past three years, as higher numbers of deer are on the roadways throughout the fall and into early winter due to the hunting and mating seasons.

The NCDOT also pointed out that most animal-vehicle crashes occur between 6 p.m. and midnight, accounting for about 45 percent of the overall total. The end of daylight savings time at 2 a.m. on November 1 also increases the chance of deer being by roadways when drivers are traveling in the dark, especially for their evening commute, the agency noted.