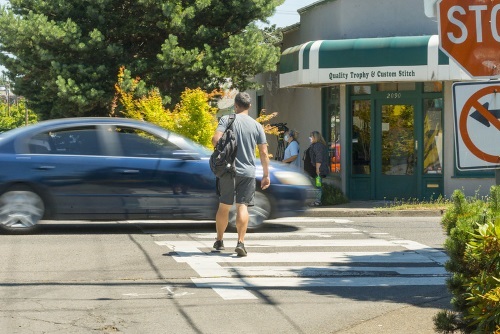 The U.S. Department of Transportation established October as the first-ever National Pedestrian Safety Month and, concurrently, many state departments of transportation are highlighting their efforts to improve pedestrian safety.

For example, the California Department of Transportation is enhancing pedestrian safety measures at high-risk locations based on traffic collision data, using what it calls a “first-of-its-kind” pedestrian safety toolbox that includes 47 countermeasures. Those include:

The agency noted that in California, pedestrians are 37 times more likely to be injured in a collision than any other roadway user. On top of that, between 2008 and 2017, the department said pedestrian-related incidents accounted for 19 percent of all collisions resulting in death or serious injury.

“At least two pedestrians or cyclists lose their lives on California’s transportation system each day — a number we refuse to accept or normalize,” stressed Toks Omishakin, director of Caltrans, in a statement. “Safety remains our top priority and the department will work diligently until the trend is reversed.”

The California Office of Traffic Safety (OTS) is also providing more than $8 million in funding for programs dedicated to the safe and equal access to roads for pedestrians, including:

Meanwhile, the Utah Department of Transportation and Zero Fatalities donated 3,500 reflective drawstring backpacks to homeless service providers throughout Salt Lake County to help those experiencing homelessness stay visible to drivers during the fall, which is typically the most dangerous time of year for pedestrians.

The North Carolina Department of Transportation kicked off its 2020 Watch for Me NC awareness campaign in late September with a new twist: distributing safety tips in English and Spanish for motorists, bicyclists, and pedestrians within food delivery orders.

“It’s great to be partnering with so many communities to proactively deliver safety messages to help raise awareness and reduce fatalities among pedestrians and bicyclists in our state,” explained Heather Hildebrandt, interim director of the department’s Integrated Mobility Division, in a statement.

The Oregon Department of Transportation is using the focus on pedestrian safety to bring attention to “White Cane Safety Day,” which falls on October 15. Established by Congress in 1964, “White Can Safety Day” aims to be “a day of awareness, education, and celebration of white canes and guide dogs for independent and safe travel” for blind pedestrians.

The Oregon DOT noted in a statement that crashes between pedestrians and motor vehicles are far more likely to take place at night when it is often harder to see people walking. Between 2015 and 2017, 77 percent of such fatal crashes occurred at night.

The top driver error involved in those crashes? Failing to yield right of way to a pedestrian, the Oregon DOT said.