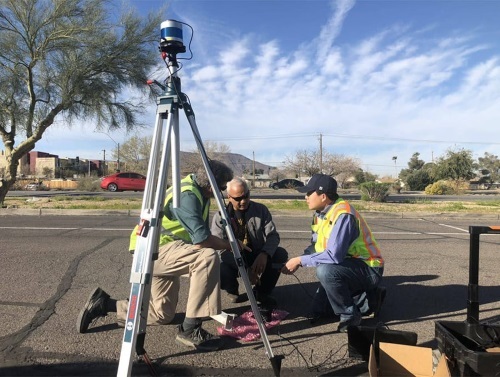 A more than three-year-old University of Nevada-Reno project that uses light detection and ranging or LIDAR sensors to make roadways “smart” is expanding with funding from new sponsors that includes the Nevada Department of Transportation.

[Above photo via the University of Nevada-Reno.]

Funding from RTC of Southern Nevada, the Nevada DOT, and the U.S. Department of Transportation’s University Transportation Center – among others – will help the university install eight more LIDAR sensors with another 12 soon to follow along roadways in Henderson, which is a suburb of Las Vegas.

The project is part of Intelligent Mobility, a multi-disciplinary research initiative coordinated through the university’s Nevada Center for Applied Research with support from a coalition of public and private partners. It seeks to use data from those LIDAR to improve roadway safety for motorists, pedestrians, and bicycling – with that data eventually helping support the deployment of fully autonomous vehicles.

Near-term, that LIDAR information will supplement traditional traffic safety data by accounting for “near-crashes,” where vehicles come close to hitting one another – or a pedestrian or bicyclist. According to a university blog post, capturing near-crash statistics helps identify intersections or stretches of roads that may appear, by traditional methods, to be safe but in fact are potentially quite dangerous.

Down the road, those LIDAR sensors will funnel data to connected vehicles in real-time to improve traffic flow and safety.

That is, if the LIDAR sensors are picking up congestion, they could theoretically communicate this congestion to users who could then adjust their routes or speeds, according to Professor Hao Xu, who heads up this research project.

Such real-time information will also be critical to autonomous vehicle operation enable these vehicles to travel as efficiently as possible, changing course when necessary and adjusting speeds as required, he explained.

“Theoretically, the data from these sensors would not only enable a single autonomous vehicle to find a more efficient path but to allow all connected vehicles on the roadway to coordinate efforts to move as efficiently as possible,” Xu noted.

There is also a potential “predictive element” to be gained from roadside LIDAR sensor data as well, he said. By taking advantage of the computational power of artificial intelligence, that sensor data could help predict how vehicles, pedestrians and bicyclists will behave in any given situation — eventually facilitating the design of safer and more efficient roads.

Finally, in addition to monitoring human behavior on and near roads, LIDAR sensors can also account for the behavior of unexpected users as well — namely, animals. Xu’s team has set up a LIDAR sensor in the Tahoe-Reno Industrial Center that has an extended goal to document wild horse interaction with the road – helping inform decisions about future road development to maximize the safety of wildlife and road users alike.