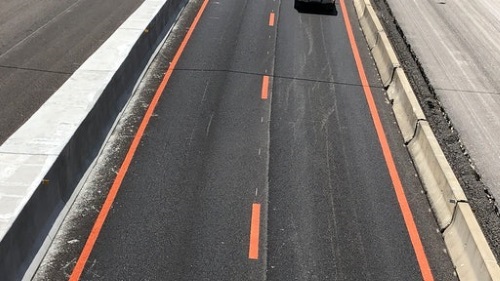 The Kentucky Transportation Cabinet is testing whether installing orange pavement markings to delineate a highway construction zone will improve safety for roadway workers and motorists alike.

According to a news story, Central Seal Company of Danville, Kentucky, became the first contractor to install orange pavement markings to delineate a construction zone when it applied orange paint to a road-widening project on Interstate 75 in November 2019.

“Several other interstate widening projects across the state have experienced motor vehicle crashes inside the work zone,” explained Daniel Hoffman, project delivery and preservation branch manager for KYTC District 11. “We just thought that we would try something new to help improve the safety of the traveling public by making them more aware of the work zone and to get their attention.”

“Motorists get accustomed to the signage and traditional traffic control devices that stay in place for a long period of time,” added Derrick Hutchinson, who works for Central Seal. “This was truly an effort to think outside the box and keep the motorists and workers safe during the construction of this project.”

Meanwhile, Kentucky is investing $8.5 million to replace about 170 buses and support other efforts to expand reliable and sustainable transportation across the state. That money comes from $20.3 million awarded to Kentucky under the Volkswagen Environmental Mitigation Trust.

“This funding will reduce pollution to create cleaner air and improve transportation options in four regions of the commonwealth,” noted Governor Andy Beshear (D), in a statement.

“The use of $8.5 million of the settlement for the purchase of cleaner-emission transit buses serves our public in two ways,” added Jim Gray, KYTC’s secretary.

“Reduced emissions mean improved air quality, which is a health benefit for everyone,” he said. “And the upgrading of transit vehicles means better service to our fellow Kentuckians who rely on public transportation for getting to work, school, doctor appointments, shopping and other places they have to go in the course of their daily lives.”

The governor’s office added that an additional $3 million in Volkswagen mitigation settlement money will go towards zero-emission vehicle equipment purchases.

Based on input received from the public, KYTC is recommending that 75 percent of that money fund the acquisition of direct current or DC fast charging stations for electric vehicles; stations to be located along selected highways throughout Kentucky and help establish unified electric vehicle corridors.