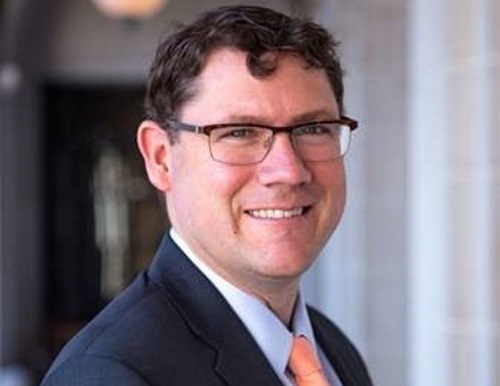 Kyle Schneweis (seen above), director of the Nebraska Department of Transportation, plans to step down as the agency’s director in November after five and a half years of service. He then plans to join High Street – a national transportation consulting firm – as its chief executive officer.

“As the first director of the new Nebraska Department of Transportation, Kyle has done outstanding work setting a vision for the agency,” said Governor Pete Ricketts (R), in a statement.

“From putting the state on the road to completing our expressway system to rebuilding after last year’s floods, Kyle’s team has stepped up time and again to meet the challenges of the moment,” the governor said. In particular, he noted that the Nebraska DOT restored 200 miles of roadway and 27 bridges in just 11 months after the flooding; the largest natural disaster to hit the state in its history.

“Kyle is one of the best in his field, and I personally appreciate all his contributions to help build quality infrastructure, so our communities can grow and thrive,” Gov. Ricketts added.

“Over the last five years, the NDOT team has come together to deliver on an incredible number of priorities for the people of Nebraska,” Schneweis noted.

“I am especially proud of the work our team has done in helping rebuild after the historic floods from last year,” he said. “Nebraska’s communities are resilient and NDOT’s work helped them bounce back rapidly.”

Another milestone in Schneweis’ career at the agency is the initiation of the $352 million Lincoln South Beltway project to connect U.S. Highway 77 and Nebraska Highway 2. On the state’s drawing board since the 1960s, the project will improve traffic flow and safety – especially for commercial trucks – in the region.

Construction on the project began this summer and should be completed by spring of 2024 – four years ahead of schedule – due to “innovative engineering and financing” approaches deployed by the Nebraska DOT to speed up construction while still retaining an eight-year payment time frame.