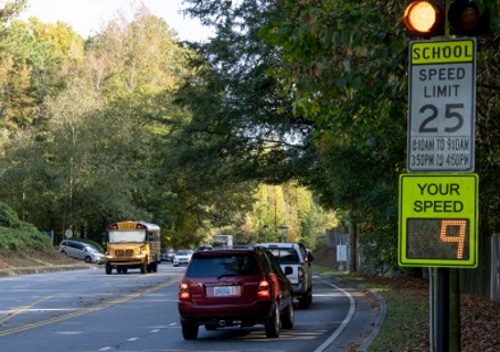 Automaker Audi of America, Applied Information, and Temple Inc., launched a joint effort on October 27 to develop two future connected vehicle applications that can help improve safety in school zones and around school buses when children are present: a project expected to wrap up in the first half of 2021.

[Above photo via Audi.]

Those applications build off technology the vehicle manufacturer has been testing with the help of the Virginia Department of Transportation since January.

Audi said the first application, using cellular vehicle-to-everything or C-V2X technology, warns drivers when they are approaching an active school safety zone and exceeding the speed limit when children are present. The second application warns drivers when they are approaching a school bus stopped to pick up or drop off students.

“Using next-generation cellular technology, we have an opportunity to help save lives of some of the most vulnerable road users: school children,” explained Pom Malhotra, Audi’s director of connected services, in a statement.

“We’re proud to work with Applied Information and Temple to help make our roads safer,” Malhorta added. “Around the country, Audi continues to take a leading role, working with partners in communities to show how C-V2X and the 5.9 GHz band can help reduce traffic hazards and improve congestion management when these technologies become ubiquitous.”

Audi said that the first application uses active roadside units or RSUs installed in school zone safety beacons — flashing signs that are intended to slow drivers down as they pass by a school – to broadcast messages to C-V2X-equipped vehicles indicating location of the school and the reduced speed limit.

This initial deployment will also help alert drivers to the changes in speed limit as school time’s change due to circumstances, such as half school days and early dismissals for weather.

In the second deployment application, onboard units or OBUs broadcast C-V2X safety messages from school buses to C-V2X-equipped vehicles when the bus stop arm is extended to indicate no passing is allowed.

According Audi, data from the National Highway Traffic Safety Administration shows that, on average, more than 100 children are killed and approximately 25,000 are injured each year walking to or from school.

Further, several separate studies indicate that school bus “stop-arm” violations continue to be one of the greatest dangers to school children; that is, a driver speeding up or failing to stop when a school bus is flashing its yellow or red signal lights and its stop sign.