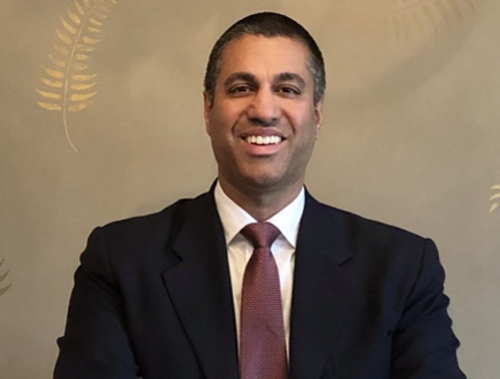 Ajit Pai (seen above), chairman of the Federal Communications Commission, issued a draft of new rules on October 28 that would open up the 5.9 gigahertz or GHz wireless communication spectrum to unlicensed services such as Wi-Fi. He added that the FCC would vote on those new rules at its November 18 meeting.

[Above photo via the FCC.]

The new rules would make the 45 megahertz “lower band” of the 5.9 GHz spectrum available for unlicensed uses such as Wi-Fi, while  transitioning the 30 megahertz “upper band” of the 5.9 GHz spectrum from what Pai described in a statement as “the long-stalled Dedicated Short-Range Communications” or DSRC automotive communication service to “modern” Cellular Vehicle-to-Everything or C-V2X technology.

Pai also proposed a set of rules to implement this new 5.9 GHz band plan. Those rules include a proposed timeline and technical parameters for transitioning the limited number of incumbent Intelligent Transportation Systems licensees to the upper 30-megahertz portion of the 5.9 GHz band and then to C-V2X-based technology, as well as adopting technical rules to enable full-power outdoor unlicensed operations in the lower 45-megahertz portion of the band.

This new 5.9 GHz plan follows from the FCC’s decision last December to move forward with this 5.9 GHz spectrum reallocation plan – a plan that continues to draw pushback from the transportation industry.

“We have warned that reallocating the majority of the 5.9 GHz band without fully considering the effects on public safety is reckless,” argued Shailen Bhatt, president and CEO of the Intelligent Transportation Society of America, in a statement.

“In fact, the definition of tragedy and irony is the FCC giving away the safety spectrum … and ignoring transportation safety experts from the U.S. Department of Transportation, all 50 state DOTs, the League of American Bicyclists, the National Safety Council, the National Transportation Safety Board, and dozens of other organizations dedicated to safety on American roadways,” he said.

Jim Tymon, executive director of the American Association of State Highway and Transportation Officials, made the same points in several missives for more than a year to the FCC, Congress, and even the White House.

“The 5.9 GHz band has been part of the spectrum that has been reserved for use for life-saving transportation technologies,” Tymon emphasized.

“At a time when we are trying to get to zero traffic fatalities, the FCC should stay the course and not give up the spectrum that the transportation community has been counting on – and has already made considerable investments in – to help save lives,” he said.