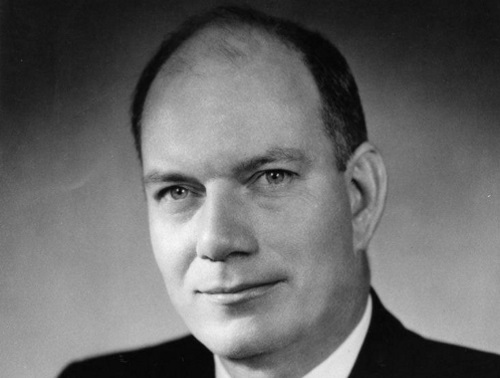 Alan Stephenson Boyd (seen above), who served as the first U.S. secretary of transportation, died on October 18 at a retirement home in Seattle. He was 98.

[Above photo via the Federal Highway Administration.]

In November 1966, President Lyndon B. Johnson selected Boyd to be secretary of the newly established U.S. Department of Transportation. The Senate subsequently confirmed Boyd and, in January 1967, President Johnson hosted Boyd’s official swearing in ceremony in the East Room of the White House.

Boyd stepped into this new job just a couple of months before the USDOT became formally and fully operational and his main task was to set up this new cabinet-level agency.

At Boyd’s swearing-in ceremony, Johnson highlighted the challenges that lay ahead for the nation’s first U.S. transportation secretary. “Alan Boyd will undertake a major assignment in attempting to coordinate a national transportation for this great land of ours,” proclaimed President Johnson.

“He will bring together, as authorized and approved by the Congress, more than 30 various agencies and attempt to get economy and efficiency and give the kind of results that the American people would like to point to with pride,” the president said.

In his pioneering role, Boyd focused on such areas as automobile safety, driver education, air traffic control systems, and the highway beautification program. He served as secretary until the end of Johnson’s term as president in 1969.

Boyd – born in Jacksonville, Florida, in 1922 – came from a transportation-oriented family. John Stephenson, a great-grandfather, created and patented the first streetcar to run on rails in the United States.

Boyd, who dropped out of the University of Florida at the end of his sophomore year, served in the U.S. Army Air Forces during World War II. As a C-47 aircraft pilot (similar to the one at right) during that conflict, he transported paratroopers to the skies above Normandy in France as part of the air assault component of the Allied D-Day invasion in June 1944. Boyd also flew needed supplies to American soldiers besieged at the city of Bastogne in Belgium during the Battle of the Bulge, which raged from December 1944 through January 1945.

After leaving the USAAF at the end of the war in 1945, Boyd returned to college. He received an undergraduate degree in law from the University of Virginia’s School of Law in 1948. Over the next couple of decades, Boyd served in high-level positions focused on transportation. Those positions included general counsel for the Florida Turnpike Authority, chairman of the Florida Railroad and Public Utilities Commission, and chairman of the Civil Aeronautics Board.

President Johnson initially appointed Boyd undersecretary of commerce for transportation in 1965. During his time in that position at the U.S. Department of Commerce, Boyd led a task force that examined the challenges facing the nation’s diverse range of transportation systems.

This group came up with a bill authorizing creation of the USDOT. Ultimately, Congress passed that bill, signed into law by President Johnson to create the USDOT as a cabinet-level federal agency.

When announcing his choice of Boyd to serve as USDOT secretary, Johnson emphasized the nominee’s pivotal leadership role in getting that legislation enacted.

After stepping down as secretary in 1969, Boyd served in a variety of executive positions, such as president of the Illinois Central Railroad, president of Amtrak, and chief executive officer of Airbus Industrie of North America.

In 1994, Boyd received the Tony Jannus Award for his contributions on behalf of commercial aviation. Boyd published his autobiography, entitled A Great Honor: My Life Shaping 20th Century Transportation, in 2016.