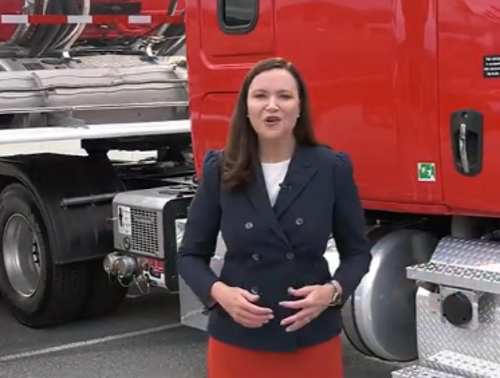 Ashley Moody (seen above), Florida’s attorney general, along with the Florida Department of Highway Safety and Motor Vehicles (FLHSMV), is launching a campaign aimed at enlisting half a million commercial truck drivers to fight against human trafficking.

The “Highway Heroes” campaign involves a multi-media campaign, outreach materials mailed directly to commercial driver license holders and a new website with resources to educate drivers on how to identify victims and report suspected human trafficking.

This joint effort is funded by a U.S. Department of Transportation grant issued to Florida’s highway safety department to help train commercial truck drivers and raise awareness about human trafficking on America’s roadways.

The campaign also includes a web site for commercial driver’s license or CDL holders where they can learn how to spot trafficking, gather evidence, report the crime and become a Certified Trucker Against Trafficking.

“Truck drivers play an important role in our fight to end human trafficking,” explained Attorney General Moody in a statement.

“Nearly half a million licensed truck drivers live in Florida, and at any given time, day or night, they can be found transporting goods across our great state,” she added. “By spending so much time on the road, visiting truck stops and communicating with each other regularly, these drivers create a powerful network that can be called upon to spot and report suspected human trafficking.”

“In Florida, we are fortunate to have more than 500,000 licensed commercial drivers that serve our communities every day,” added FLHSMV Executive Director Terry Rhodes.

“Not only do they keep our economy moving and haul essential goods, but they also are uniquely positioned to shine a light on traffickers that exploit our transportation system for their horrific crimes,” Rhodes noted. “I appreciate Attorney General Moody and our trucking industry heroes for prioritizing the fight against human trafficking in our state and on our roadways through this important initiative.”

The Highway Heroes digital media campaign will run through January 2021, which is National Human Trafficking Prevention Month, the agency said.

State departments of transportation across the country have been assisting in anti-human trafficking efforts over the last two years.