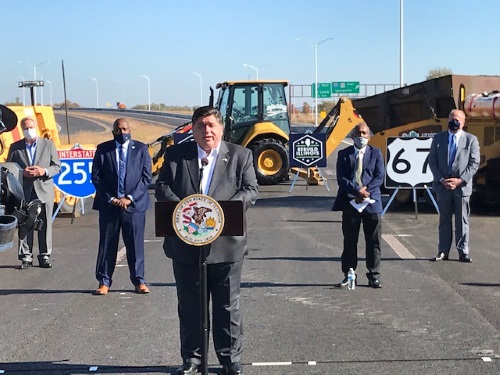 The Illinois Department of Transportation expects to save $14 million by finishing its Interstate 255 rehabilitation project a month early – a project that is also improving the safety and efficiency of a major freight and personal travel corridor.

The agency said the I-255 project should be finished on November 1 and cost $67 million — $14 million less than originally predicted. Illinois Governor J.B. Pritzker (D) noted in a statement that I-255 project – one of the first to be completed under the state’s bipartisan Rebuild Illinois capital program passed in 2019 – repaired that highway quicker, safer, and cheaper by closing the work zone to all traffic for nine months instead of spreading work out over multiple construction seasons.

“It is investments like the rehabilitation of I-255, which sees about 55,000 vehicles a day, that will extend our state’s leadership as a multi-modal transportation hub, improving local bridges and keeping our roadways safe and smooth,” the governor added. “This highway saw $67 million worth of drainage upgrades, bridge repairs, and resurfacing. Best of all, we got this project done in record time – months instead of years – saving money and protecting drivers and workers alike by strategically closing the road for work.”

The Illinois DOT added that the savings from the I-255 project – which rehabilitated and resurfaced approximately seven miles of I-255 from Collinsville Road to Illinois 15 in two sections separated by Interstate 64 – came from completing highway repairs in just one construction season versus the four years required by “staging” construction over time.

Instead, the agency closed the north section between I-64 and Collinsville Road in February and re-opened it in July: eliminating the safety risk to its workers and motorists by removing traffic from the work zone.

“By closing I-255, we were able to deliver this much-needed project and minimize the impact to motorists and local businesses,” explained Omer Osman, acting Illinois transportation secretary.

“We applaud the public for their cooperation,” he added. “Thanks to Gov. Pritzker’s leadership and Rebuild Illinois, we look forward to completing many more projects that improve safety, mobility and quality of life in Metro East and throughout the state.”

The agency also said that, due to the I-255 time savings, it is beginning “preliminary work” on the $18.6 million Delhi Bypass project in Jersey County. The Delhi Bypass project will build a new road and expand a 2.4-mile section of U.S. 67 from two lanes to four lanes – part of a larger vision to eventually expand and extend U.S. 67 north in multiple phases that should be completed in late 2022.