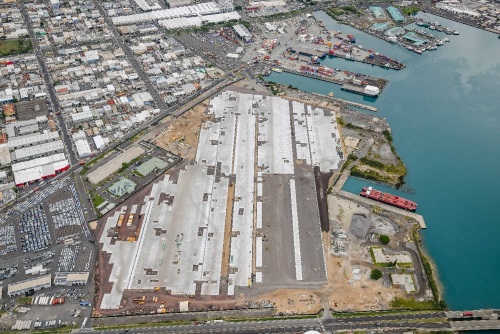 The Hawaii Department of Transportation recently awarded the contract for the Kapalama Container Terminal Phase 2 project (seen above) to Kiewit Infrastructure West – a “cornerstone project” for the agency’s effort to upgrade the maritime freight handling capability of Honolulu Harbor that is also being financed by revenue collected from harbor user fees, not traditional taxpayer money.

The agency added that Hawaii’s harbor system is vital to its economic security as more than 80 percent of all the goods consumed by people in Hawaii are imported, with more than 98 percent shipped in through the harbor network.

The $350 million Phase 2 portion of this project involves waterside construction at Piers 40-43 in Honolulu Harbor to add 18.5 acres of “fast-land” for freight, including 1,860 linear feet of new berthing space for two container ships to dock simultaneously and up to six gantry cranes.

The Hawaii DOT added that Phase 2 of this project also includes dredging along the waterfront and up to the federal channel and widening of the water basin between Piers 40 and 41. That creates important barge berthing space along Pier 41 while addressing sea level rise by increasing the pier height that will match the Phase 1 elevated backlands in construction, the agency said.

The agency pointed out that Phase 1 of this project adds 65.5 acres of container yard space to meet Honolulu Harbor cargo throughput demand for the near future while reducing traffic on surrounding roadways such as Nimitz Highway by taking approximately 50,000 truckloads off the roads each year.

“The Kapalama Container Terminal project is especially exciting because it will add much needed docking and cargo space that will increase efficiency for harbor users, help reduce traffic around Honolulu Harbor, and address sea-level concerns for the facility,” explained Jade Butay, director of the Hawaii DOT, in a statement.

“This project is proceeding at a critical time when our state needs it most as we continue fighting COVID-19 and its impacts,” added Governor David Ige (D). “The work will be performed by local talent and infuse hundreds of millions of dollars into the local economy [while] improving our harbor system that will benefit the state for decades to come.”