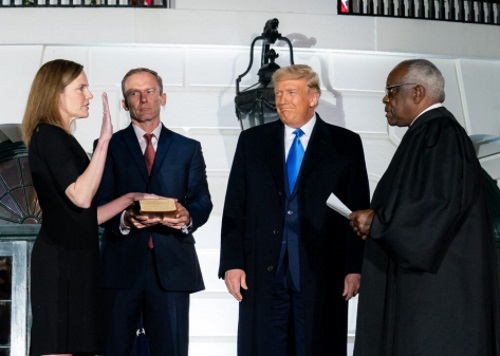 Two transportation-related cases before the U.S. Supreme Court may bear the imprimatur of newly appointed Associate Justice Amy Coney Barrett (at far left above) who officially took the oath of office on October 27.

Research conducted by the American Association of State Highway and Transportation Officials notes that these two cases on the docket for the Supreme Court’s current term could affect certain segments of the transportation industry.

The first case is Ford Motor Company v. Montana Eighth Judicial District Court, which centers around the 2015 death of Markkaya Jean Gullett after tread on one the tires her Ford Explorer separated, causing her to lose control of the vehicle and crash into a ditch along a Montana highway.

For example, a court has general personal jurisdiction over a corporate defendant if the defendant’s headquarters are within the state or if the firm is incorporated in the state.

A Montana district court denied Ford’s motion to dismiss and the Montana Supreme Court affirmed, reasoning that by advertising and selling parts within the state of Montana, Ford had availed itself of the privilege of doing business in that state and was therefore subject to specific jurisdiction there.

The question the Supreme Court seeks to answer in this case is whether a state court, consistent with the Due Process Clause, exercise personal jurisdiction over a nonresident defendant when none of the defendant’s contacts with that state caused the plaintiff’s claim.

After a hearing, a the board concluded that Salinas’s 2006 application was beyond the four-year timeframe for reopening based on new and material evidence or administrative error under the Board’s regulations – a dismissal upheld by the U.S. Court of Appeals

The question put to the Supreme Court in this case is whether the Railroad Retirement Board’s denial of a request to reopen a prior benefits determination is a “final decision” subject to judicial review.