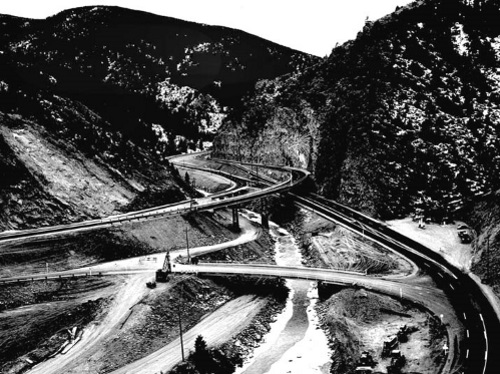 The first annual meeting of the American Association of State Highway and Transportation Officials took place at the Raleigh Hotel in Washington D.C. on December 12, 1914 – a point in time when World War I was only five months old and Woodrow Wilson was at the start of the first of two terms as president of the United States.

[Above photo via the National Archives.]

That meeting nearly 105 years ago formally established the American Association of State Highway Officials or AASHO – which subsequently changed its name to AASHTO in 1973 – to address state-level highway needs and priorities.

Just 27 states attended that first-ever 1914 meeting, with only 17 represented in person by either their highway commissioners or engineers, while proxies represented the remaining 10 states. During the meeting, AASHO selected Henry Shirley of Maryland as its first president and its first official action under his leadership involved approving a legislative proposal to authorize participation of the federal government in highway construction.

While this inaugural meeting proved pivotal in launching of the new association, AASHO’s second annual meeting in December 1915 in Chicago set the stage for subsequent large-scale in-person conferences held on a yearly basis.

Those present for the meeting in Chicago focused on the continued need for federal aid allowing states to build better roads. Seven months after that meeting, President Wilson signed into law the pioneering Federal Aid Road Act of 1916, which helped lay the groundwork for the federal-state partnership in the building of highways nationwide.

The annual meetings have also been defining moments for AASHTO and more generally the further development of the nation’s transportation network. At the annual meeting in Pinehurst in November 1926, for example, delegates formally approved the locations of routes for the newly designated U.S. Numbered Highway System with the U.S. Bureau of Public Roads officially approving those routes in January 1927.

Three decades later, the AASHO annual meeting in Atlantic City in November 1956 highlighted new major changes and challenges in roadbuilding for the states. In June of that year, President Dwight Eisenhower signed into law the Federal Aid Highway Act of 1956 authorizing the Interstate System.

He also took a moment, though, to make a point about the work that had yet to be completed: “It is simply this – we have a job to do!” said Whitton. “I know that we are going to do the job, but doing it will require courage, foresight, wisdom, initiative and vision.”

Another milestone in the history of the association occurred at the annual meeting in Los Angeles in November 1973. During this meeting, the association’s Policy Committee approved a proposal to change AASHO’s name to AASHTO to reflect a broader mission and membership that would encompass a multi-modal mission rather than just a highway-only orientation.

“In making these changes, I think the association is keeping abreast of the times and stepping into a role that is needed,” outgoing president Thomas Airis of the District of Columbia proclaimed at the meeting. “The emphasis now, as in the past, is on state officials.”