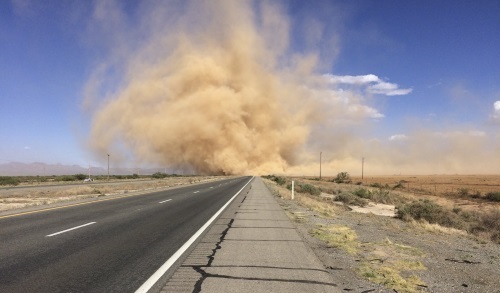 With its first monsoon season under its belt – though it proved a very mild season – the Arizona Department of Transportation said its new dust detection and warning system, which went live in June, is working as designed.

“It was a mixed blessing,” explained David Locher, resident engineer for the Arizona DOT project, in a blog post. “Less dust storms is obviously a good thing when it comes to driving conditions; however, we didn’t have the normal weather events that would have been ideal for data gathering in our first season.”

He noted, though, that one 20-minute event provided measurable data on the system’s capability. At one point during that storm, visibility dropped to less than 300 feet, triggering a highway speed limit to drop to 35 mph – a decline that happens incrementally. How did drivers react to the warning system? The loop detectors showed that average vehicle speed fell to about 45 mph; a big drop from the normal 75 mph limit.

“We do know that the system is working – it is doing what it’s supposed to,” added Kevin Duby, statewide road weather manager for the Arizona DOT. “Our next step is to take the data we have to evaluate and determine the efficiencies of the system to improve performance.”

The $72 million dust-detection technology employed includes overhead message boards, variable speed limit signs, closed-circuit cameras and short-range detectors for blowing dust. In addition, a long-range weather X-Band radar dish is part of the system, sitting atop a 22-foot-tall pole at the SR 87 interchange that can detect storms more than 40 miles away.