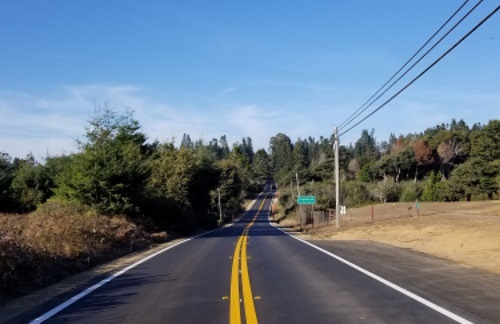 The California Department of Transportation seeking 150 volunteers to participate in its ongoing research on a road user charge or RUC – also called also referred to as a vehicle miles traveled or VMT tax or a mileage based user fee or MBUF system – that would serve as an alternative to the state’s motor fuel tax.

[Above photo by Caltrans District 1]

The California Road Charge Phased Demonstration plans to first explore how to charge drivers for the miles they travel rather than the gasoline they purchase and consume by testing a user-friendly pay-at-the-pump and electric vehicle charging station system, or through a usage-based insurance approach.

The six-month demonstration will start in January 2021 and builds on California’s 2017 Road Charge Pilot, which tested the feasibility of funding road and highway repairs based on how many miles a driver travels instead of how much gas they purchase.

Volunteer for the demonstration must be California residents over the age of 18 but do not need to own or lease a vehicle in order to participate.

The agency said participants in this pilot program would be eligible to receive up to $100 in incentives each for their time and feedback. Future phases of the Caltrans demonstration project aim to include testing of app-based payment of rideshare miles and capturing data from autonomous vehicles.

“Caltrans is continuing its research to explore how a future road user charge can fund transportation projects throughout the state,” noted Toks Omishakin, director of Caltrans, in a statement. “We want Californians to join us in testing payment options that will inform our research in designing an equitable and sustainable road charge program.”

The agency said fuel taxes currently remain the “primary source” of state funding for road and highway repairs and upgrades. With vehicles growing more fuel efficient and more zero-emission options becoming available, Caltrans is testing various methods to collect mileage-based fees in a system where drivers contribute based on how much they use the road.

In December 2018, a consensus study report issued by the National Academies of Sciences, Engineering, and Medicine recommended that VMT fees be part of the “future funding discussion” to support the needs of the U.S. interstate system, which that group said requires an annual investment of $57 billion.