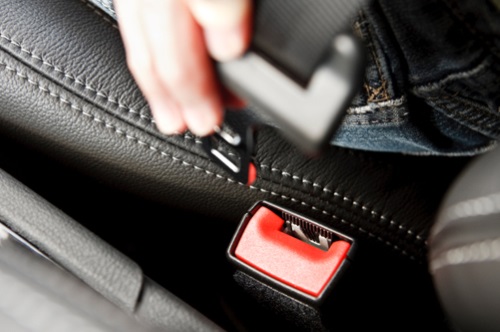 [Above photo via AAA]

The agency said its 2020 push combines an $8 million public awareness advertising campaign on television, radio, web, and social media in both English and Spanish that will run from November 9-29, combined with a national enforcement effort from November 16-29.

“Seat belts save lives – but only if they’re worn,” explained James Owens, NHTSA deputy administrator, in a statement. “’Click It or Ticket’ reminds everyone to wear their seat belt every trip, every time, and officers will be patrolling our roads to enforce these lifesaving laws.”

According to the National Occupant Protection Use Survey, seat belt use continued to be lower for males (87.7 percent) than females (92 percent) in 2018.

Among young adults 18 to 34 killed in crashes in 2018, NHTSA data indicates 58 percent were completely unrestrained – one of the highest percentages for all age groups.

The first, issued on November 10, seeks approval to collect information from a random sample of adults (18 years or older) who have driven a motor vehicle in the past month for a one-time voluntary survey to report their knowledge, attitudes, and behaviors associated with drowsy driving.

The second, issued on November 12, is a request for information so NHTSA can “better understand” impaired driving detection and mitigation technologies – particularly those targeting alcohol-impaired driving.

Video: Every Day is Earth Day for State DOTs