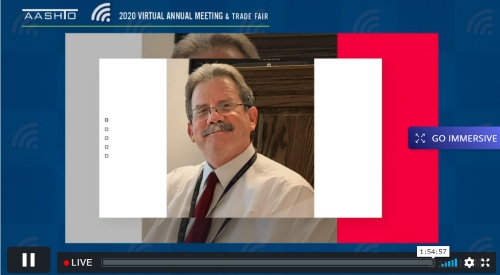 The American Association of State Highway and Transportation Officials recognized multiple individuals for their contributions to the transportation industry during its annual meeting November 9-13.

AASHTO recognized Dr. Eric Kalivoda (seen above), deputy secretary of the Louisiana Department of Transportation and Development, with its Thomas H. MacDonald Memorial Award for his tireless advocacy for statewide transportation and funding needs over the course of his 28-year career with the agency.

Dr. Kalivoda has emerged as Louisiana DOTD’s top expert on transportation planning and programming during his career; proving instrumental in the development of multiple editions of Louisiana’s Statewide Transportation Plan. He also spearheaded the 1999 task force that developed the agency’s current highway project selection process – still in use today – and served as the leading architect its strategic plans under three different gubernatorial administrations.

Dr. Kalivoda also created and continues to direct right-sizing program to transfer non-core state routes to local governments, elevated the funding and staffing of the Highway Safety Program, and has overseen the Louisiana DOTD’s diversity council.

AASHTO presented Chad Sheppick from the Utah Department of Transportation with its Alfred E. Johnson Achievement Award for the many changes he implemented as director of the agency’s motor carrier division. Sheppick “reframed the division’s mission from primarily regulatory into a customer-focused mission,” with programs now structured to provide required inspections, interwoven with a keen understanding of the industry’s mission and purpose. A 20-year Utah DOT veteran, Sheppick’s leadership also helped “inspired change” in the division’s employees and in the culture of the organization.

AASHTO awarded the New Jersey Department of Transportation with its Francis B. Francois Award for Innovation in recognition of its Marine Navigation Retroreflective Markers project. The New Jersey DOT team developed and installed “flexible delineators” as a navigation lighting backup for the 65 bridges crossing navigable waters across the state – devices that received approval from the U.S. Coast Guard.

The delineators provide extra navigation guidance to boaters to ensure safer navigation of water channels while eliminating the potential for a $25,000 civil penalty for a malfunctioning light.

New Jersey DOT tested its flexible delineators – used extensively in highway applications since 2013 – on several contracts before final acceptance by the U.S. Coast Guard as a navigation lighting backup.

Shailen Bhatt, president and CEO of the Intelligent Transportation Society of America, received the AASHTO President’s Special Award of Merit during the group’s annual meeting – an award that recognizes an individual who has made “outstanding and exemplary contributions” to the work of the association.

He has testified numerous times before Congress to promote the positive safety impact of intelligent transportation technologies – including connected and automated vehicles. Bhatt is also a longtime and tireless advocate for the preservation of the 5.9 GHz wireless communication spectrum for transportation safety needs.

Other awards given out by AASHTO at its annual meeting include: