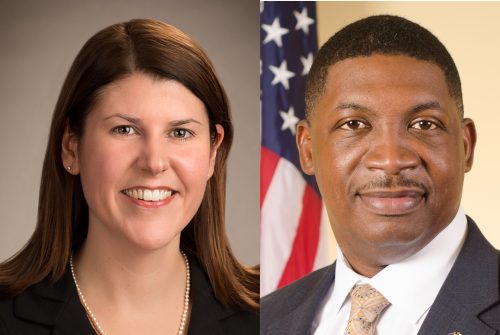 The board of directors of the American Association of State Highway and Transportation Officials elected Victoria Sheehan (above at left), commissioner of the New Hampshire Department of Transportation, to serve as its 2020-2021 president on November 13 during its annual meeting: only the second woman to serve as AASHTO president in the association’s 106-year history.

“I am honored to be elected to lead this outstanding organization during an extraordinary time in our history,” Sheehan said.

“The COVID-19 pandemic, natural disasters, as well social unrest in support of racial equality and inclusion are challenging us in many ways,” she added. “As transportation leaders, we have a role to play and one of my presidential emphasis areas focuses on the need for training, recruiting, and building a diverse state DOT workforce that reflects all of the people we serve.”

Sheehan – who was AASHTO’s 2019-2020 vice president – has served as the commissioner of the New Hampshire DOT since October 19, 2015, managing an operating budget of $650 million and more than 1,600 full time employees. Her career has included time as a resident engineer and as a project manager, with extensive experience in asset and performance management.

“As I look to the year ahead, I look forward to working with all of you,” she said during her remarks during the meeting. “Our work touches every person’s daily life, and if we do our jobs well, we are providing access and mobility to everyone.”

Sheehan – originally from Northern Ireland – has a Master’s Degree in structural engineering and architecture from the University of Edinburgh in Scotland. She lives in Nashua, NH, with her husband and son.

Wilson – appointed Louisiana DOTD’s secretary on January 11, 2016, following more than 10 years of executive service at the agency – is a longtime advocate for new revenue, maximizing federal dollars available to Louisiana, advancing a balanced and comprehensive transportation policy for Louisiana, and ensuring the department is more collaborative in its work at every level.

“I am filled with both gratitude to the board and a keen sense of duty and responsibility for becoming the first black person to serve as AASHTO vice president,” Wilson said.

“We’ve made a lot of progress in America, but recent events remind us all just how importance diversity and inclusion are to all of our institutions,” he added.

Wilson has a Bachelor of Arts in urban and regional planning from the University of Louisiana and holds a Master of Public Administration degree, as well as a Ph.D. in public policy from the Nelson Mandela School of Public Policy and Urban Affairs at Southern University.

Wilson and his wife live in Lafayette, LA. They have two sons and a granddaughter.

McMurry, who was unanimously appointed by the State Transportation Board to be commissioner of the Georgia DOT in January 2015, leads a 4,000-member staff with an operating budget of over $3.5 billion.

He began his career with the Georgia DOT in 1990 as an engineering trainee and remains “keenly aware of the criticality” that transportation infrastructure plays in Georgia’s economic competitiveness, economic growth, and quality of life for all of its residents.

A Georgia native, McMurry and his wife, Michelle, are the parents of three children.