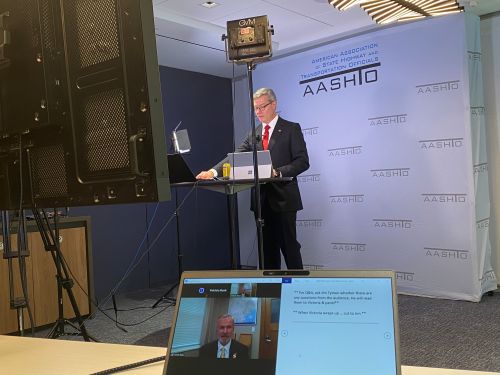 The American Association of State Highway and Transportation Officials provided an overview of the potential post-election shifts in national transportation policies and priorities during its 2020 annual meeting.

During the organization’s Transportation Policy Forum virtual summit on November 12, Jim Tymon (seen above) – AASHTO’s executive director – explained that though several elections for seats in the House of Representatives have yet to be called, the Democratic party is expected to retain control of the House albeit with a narrower majority.

“We do not expect to see any major changes in leadership there,” Tymon said. “Rep. DeFazio {D-Ore.] will remain chair of the House Transportation and Infrastructure Committee while Rep. Sam Graves [R-Mo.] will remain the ranking member.”

He noted, however, that control of the Senate is “less certain” with both Georgia senate seats headed for runoff elections in January 2021.

“Regardless of what happens in Georgia, it is not unusual to see shifts in committee leadership mainly because of the term limits. So we will likely see some changes if Republicans retain control,” he added, with possibly Sen. John Barrasso, R-Wyo., leaving as chair of the Senate Committee on Environment and Public Works to take over as chair of the Senate Committee on Energy and Natural Resources. That would most likely mean Sen. Shelley Moore Capito, R-W.Va., would become the EPW committee’s new chair.

If the Democratic party gains control of the Senate, there would also be committee leadership shifts but it is “a little less clear what those changes would look like – we need to wait and see how the runoff elections turn out,” he pointed out.

However, regardless of which party is in charge on the Senate side, Tymon said he expects “infrastructure will be a priority, either as part of a larger infrastructure package or within surface transportation reauthorization legislation and we expect Congress will dive into that in early spring.”

With AASHTO’s reauthorization principles adopted at its 2019 annual meeting in St. Louis as foundation for policy, Tymon noted that the organization will expand its focus to include “emerging issues” such as infrastructure resilience, electric vehicle infrastructure, the impact of climate change, greenhouse gas emission reductions and autonomous vehicle infrastructure needs.

“Those are issues we’ve been talking about for a while, but their prominence in Congress increased in importance last year and will likely rise further under President-elect Biden next year,” he said.

The next four weeks, however, will be critical as fiscal year 2021 appropriations bills need to be passed. “Current federal funding only gets us through December 11 and Congress needs to find some way to get the federal government funded through September 30, 2021,” Tymon noted. “And there is not much time to do that as the legislative calendar is short.”

Finally, Tymon noted that a COVID-19 relief measure remains “a big priority” for AASHTO and state DOT community. “We continue to have a lot of support from our transportation industry partners,” Tymon said. “There is a lot of uncertainty but also a lot of energy and excitement as a new administration comes in with new priorities and ideas. It is an exciting time to see what is going to happen in the future.”