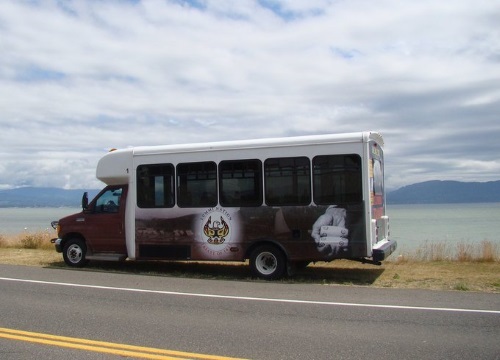 [Above photo via the FTA.]

“The Federal Transit Administration is committed to partnering with tribal residents to support their transportation needs,” said noted K. Jane Williams, the agency’s deputy administrator. “We’re proud to invest in their transit systems which provide access to critical services, which is particularly important during the [COVID-19] public health emergency.”

In addition to those grants, the FTA provides $30 million in formula funding to tribes each fiscal year through the Tribal Transit Formula Grant program.

In June, the USDOT also recently implemented a final rule to change how the federal government interacts with tribal governments when it comes to transportation projects.

That rule establishes a tribal transportation self-governance program, designed to provide a “flexible, effective framework” for the federal government and Indian tribes to work collaboratively to improve transportation infrastructure delivery in Indian country.

“This program will boost prospects for economic growth and enhance quality of life by strengthening transportation infrastructure and reducing administrative red tape for Tribes receiving funding from the Department,” noted Secretary Chao in an earlier statement.

She added that this new rule is the result of a “successful multi-year negotiated rulemaking process” between representatives of the nation’s Native American tribes, USDOT, and the U.S. Department of the Interior.