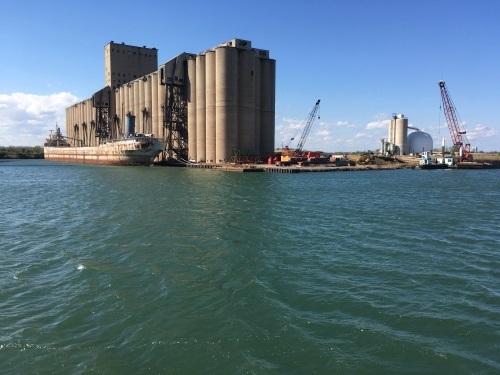 [Above photo via the Illinois International Port District.]

The Illinois DOT expects to use public feedback to shape strategies to strengthen a state resource that generates $36 billion in economic impact annually and supports more than 160,000 jobs statewide.

“Our waterways system is a big reason why Illinois is the transportation hub of North America,” said Omer Osman, acting transportation secretary for Illinois, in a statement.

“This study will make sure we are taking full advantage of a critical part of the state’s economy and help IDOT deliver the governor’s Rebuild Illinois capital program,” he said.

He added that his agency plans to use the Illinois Marine Transportation System Plan to guide its planning and programming efforts to integrate the system in the state’s overall multimodal transportation network.

It also will help plan the distribution of $150 million identified for improvements to the marine transportation system within the aforementioned Rebuild Illinois program – $40 million of which is supporting a public-private partnership to build a new inland port at the confluence of the Mississippi and Ohio rivers in Cairo.

There has been a range of state level activity regarding marine transportation systems of late.

In October, the U.S. Department of Transportation designated the North Carolina Ferry System (NCFS) as a marine highway project: a first for that state.

The USDOT’s Maritime Administration or MARAD noted that marine highways are “navigable waterways” that are used as “alternate options” to traditional transportation methods – such as highways – for moving freight.

That designation also enables the NCFS to apply for federal funding to modernize its vessels and improve infrastructure at terminals: further allowing for the streamlining of maintenance to meet the region’s needs of efficient transportation of freight and vehicles.