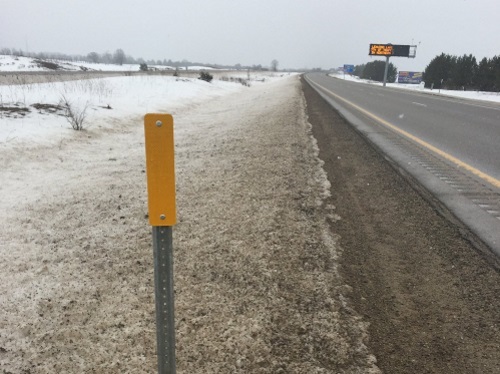 The Michigan Department of Transportation deployed “targeted technology” as well as low-cost tactics to make roads safer across the Upper Peninsula over the course of 2020 – part of a broad effort to promote its Toward Zero Deaths or TZD strategy across Michigan.

[Above photo via the Michigan DOT.]

Since 2010, the Michigan DOT has collaborated statewide with law enforcement officials and first responders to promote this important national highway safety strategy, including posting year-to-date fatality totals in their offices and on roadside dynamic message signs – efforts that are raising awareness of traffic safety challenges in Michigan.

[During the annual meeting of the American Association of State Highway and Transportation Officials Committee on Safety – held virtually from May 11 through 14 due to the COVID-19 pandemic – a panel discussion focused on how changing human behaviors is one key to the success of the TZD programs.]

The Michigan DOT said it paid particular emphasis during the 2020 construction season to safety concerns within its Superior Region – which encompasses the entire Upper Peninsula – with specific road projects and system-wide improvements.

One major 2020 safety project is a queue detection and warning system on the I-75 approach to the International Bridge in Sault Ste. Marie. The $422,000 system uses sensors to detect backed-up traffic and automatically activates flashers on yellow “Watch for Backups” warning signs along the highway approach. An electronic message board also alerts drivers with a similar message.

“The system addresses rear-end and sideswipe crashes that can occur when traffic backs up from the toll plaza at the International Bridge,” added Justin Junttila, a Michigan DOT region traffic and safety engineer, in a statement.

Another 2020 safety project on US-2 in Hudson Township along Lake Michigan involves building right-turn lanes and installing truck-warning systems. Graymont Mine is using portions of Borgstrom Road and US-2 to haul raw material to a dock along US-2, resulting in an expected 200 truck trips per day in the area.

As a result, the Michigan DOT joined with Graymont on a grant application for funds to support the installation of those right-turn lanes, allowing trucks to make safer turns, improving traffic flow, and reducing the potential for both rear-end and sideswipe crashes.

Safety improvements were also a major part of a $5.3 million project this year to resurface 9.6 miles of US-41 from Hancock to Calumet in Houghton County. Along with a new road surface, safety improvements in the area included realigning Boston Road, installing a left-turn passing flare, and closing access points to US-41 from two other roads.

“Limiting access reduces the number of conflict points, the locations where vehicle paths merge or cross, and thereby the crash potential,” Junttila said.

Other statewide TZD efforts spearhead by the Michigan DOT over the past year within its Superior Region also offer heightened potential for crash reduction and increased safety: