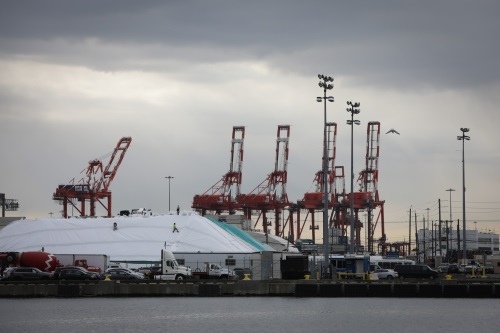 New Jersey Governor Phil Murphy (D) and the New Jersey Department of Transportation jointly announced a series of infrastructure projects to enhance safety and vehicle movement at the Port of New York and New Jersey during a November 17 event.

[Above photo via the New Jersey DOT.]

“For decades, New Jersey and our ports have been the corridor through which much of our nation’s economic activity has flowed,” the governor said in a statement.

“I’m thrilled that these critical projects will further enhance regional operations and contribute to a stronger, more modern infrastructure that will both deliver safer roads and bridges as well as fuel our state’s economic recovery — not just as we work toward the end of the pandemic, but for decades to come,” he added.

“In doing so, the jobs here at the port, and the jobs created by the infrastructure projects around us will help ensure a stronger, fairer, and more resilient post-COVID economy,” the governor noted.

“The New Jersey Department of Transportation has invested hundreds of millions of dollars in advancing projects in the port district that directly and indirectly support the efficient movement of goods,” added Diane Gutierrez-Scaccetti, New Jersey DOT’s commissioner. “The investment in these ‘Portway’ projects today ensures our road and bridge network will be able to handle the intermodal freight needs of the future in a safe and efficient manner.”

The New Jersey DOT added that the Port of New York and New Jersey – comprised of facilities in both states – serves more than 134 million people regionally, and supports roughly 500,000 jobs that generate billions of dollars in economic activity each year.

The agency added that this infrastructure upgrade effort for the port encompasses three roadway and bridge projects:

Meanwhile, the New Jersey DOT issued $161.25 million in Municipal Aid grants on November 18 to 543 cities and towns statewide to advance a variety of road, bridge, safety, and quality-of-life improvements.

The agency noted that the Transportation Trust Fund (TTF) renewal in 2016 made it possible to continue to award $161.25 million annually – more than double the $78.75 million available before the TTF renewal.

In addition, the extra allow the New Jersey DOT to increase the number of municipalities receiving grants from about 370 a year prior to the TTF renewal to 543 municipalities in 2020.

According to a statement by the New Jersey Governor’s office, under the Municipal Aid grant program, each county is apportioned a share of the total funding based on population and the number of local centerline miles – with municipalities competing for portions of their county’s share.

The New Jersey DOT then provides 75 percent of the grant amount when a town awards a contract and the remaining 25 percent upon completion of the project.