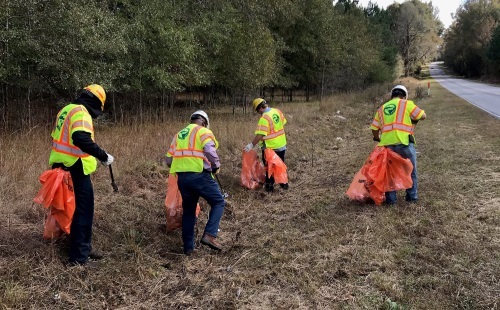 The South Carolina Department of Transportation noted that 1,700 of its employees picked up 13,130 bags of roadside trash weighing 209,725 pounds on November 17 in support of Lt. Gov. Pamela Evette’s “Grab A Bag SC 2020” statewide cleanup program.

[Above photo by SCDOT.]

“We ask the public to help us keep the newly cleaned highways litter-free,” noted Christy Hall, SCDOT’s secretary in a statement. “Not only is litter an eyesore, but it can clog drains, pollute waterways, and hurt our state’s economy by discouraging economic development.”

The agency added that SCDOT employees are planning to participate in another statewide litter cleanup day in spring 2021.

For example, the Georgia Department of Transportation launched an anti-litter campaign in October called “Keep It Clean Georgia” that seeks to prevent and eliminate litter along 50,000 miles of interstates and state routes that crisscross Georgia.

That followed the Virginia Department of Transportation’s recent Virginia is for Lovers, Not Litter public outreach campaign, kicked off in September, that aims to raise awareness about Virginia’s roadway litter problem.

The agency noted its spends nearly $3.5 million annually to remove litter from Virginia’s roadways, with more than half of that litter coming from motorists with another 25 percent from pedestrians.

Then there is the Alabama Department of Transportation, which launched an anti-litter campaign entitled “Trash Costs Cash” in August. The campaign uses television, radio stations, and social media sites such as Facebook and YouTube to highlight a major increase in litter fines and penalties authorized by the state legislature in 2019.

The agency – which spent almost $7 million in 2019 to clean up litter along state roadways – noted that fines for littering have doubled statewide. The minimum fine is now $500, up from $250 for a first conviction, while the second conviction is $1,000 and up to 100 hours of community service.