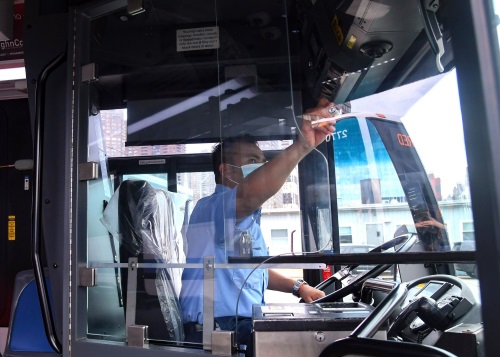 The COVID-19 pandemic is having “surprising effects” on demand for public transit in America, according to study recently published by Ohio State University – with an “uneven” decline in transit demand due to the nature of jobs in different cities and who actually used public transportation before the pandemic struck.

[Above photo by the Metropolitan Transportation Authority.]

Study authors Harvey Miller – professor of geography at Ohio State – and Luyu Liu, a doctoral student in geography at the school, found that while demand for public transit dropped about 73 percent across the country, large, coastal cities such as Seattle, San Francisco, and Washington, D.C. suffered larger demand declines compared to cities in the Midwest and South.

“Many of the people who used public transit in large, coastal cities could work remotely from home after the pandemic,” Liu noted in a university blog post. “But in cities in the Midwest and the deep South, most public transit users have jobs where they still had to come in to work during the pandemic and didn’t have any other choice.”

The study’s research team collected data on activity by users of the popular Transit mobile phone app, which provides real-time public transit data and trip planning. Using data on 113 county-level transit systems in 63 metro areas and 28 states across the United States, they examined app use from February 15 – right before widespread pandemic lockdowns began – up to May 17.

Some of the study’s findings include:

Meanwhile, a post-election survey directed by Heart+Mind Strategies on behalf of the American Public Transportation Association found that a 77 percent of American voters – including self-identified Democrats, Republicans, and Independents – support emergency funding for public transportation so that front line workers can get to jobs and to help the economy recover.

The survey results also found that 74 percent of American voters approve of the new presidential administration and Congress taking action to fix the public transportation infrastructure crisis facing our nation.

“These survey results clearly show that Americans not only want actions now to save public transit during the pandemic, but they want continued long-term actions that preserve and expand public transit services,” noted Paul Skoutelas, APTA’s president and CEO in a statement.

“The public transportation industry continues to serve essential employees every day, but without additional emergency funding, many transit agencies will need to make draconian cuts to transit services and routes and furlough transit workers, leaving our communities without service and jobs when they need them most.”

APTA is calling on Congress to provide at least $32 billion in additional emergency funding to prevent public transit agencies from making severe route and labor cuts. APTA’s surveys show that six in 10 public transit systems will need to reduce service and furlough employees in the coming months without emergency federal funding from Congress.