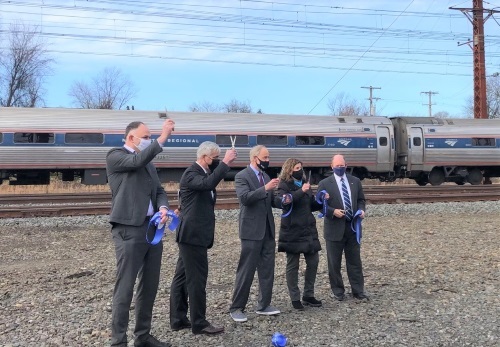 Amtrak, the Delaware Department of Transportation, and the Delaware Transit Corporation recently completed a $71.2 million project to increase capacity between Wilmington and Newark on the Northeast Corridor.

[Above photo by Amtrak.]

That project also included installation of 1.5 miles of a new, electrified main line third track between Ragan and Yard interlockings, bridge replacement, and other improvements – eliminating a previous two-track bottleneck. The change will result in improved on-time performance, reduction in delays, and overall improvement in this section of railroad, Amtrak noted.

“The completion of this project marks an important rail capacity expansion milestone on the Northeast Corridor, resolving bottlenecks which previously constrained SEPTA [the Southeastern Pennsylvania Transportation Authority] and Amtrak from operating service at maximum capacity,” said Bill Flynn, CEO of Amtrak, in a statement. “As we anticipate the return of pre-COVID-19 ridership growth, it is vital that we have the proper infrastructure in place to support a higher capacity railroad.”

The project – 20 years in the making and developed as a “shared benefit investment” as part of a 2011 agreement between DTC and Amtrak – received funding via Federal Railroad Administration, Federal Transit Administration, and Federal Highway Administration grants issued to DTC, along with funding from Amtrak.

Meanwhile, the Delaware DOT unveiled a new “Report a Pedestrian Issue” feature at DelDOT.gov and on the DelDOT App to make it easier for pedestrians to report an issue along state roadways, sidewalks and paths.

The DelDOT App is available for Apple and Android smart phones and tablets, as a free download. Search for “DelDOT” at the Apple and Google Play stores.

The agency said in a statement that issues reported via the app – such as curb ramps in need of repair, lack of sidewalks, objects or vegetation blocking sidewalks, cracked or broken sidewalks, and other problems – are then sent to Delaware DOT’s “pedestrian coordinator” for review.