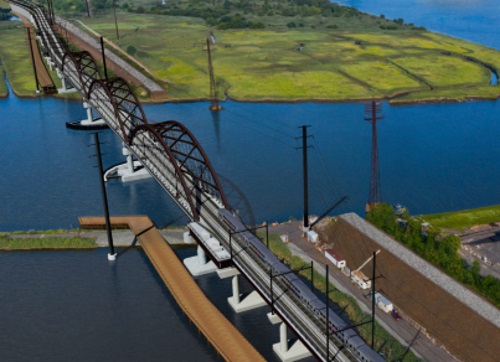 The NJ TRANSIT board of directors voted to authorize a full funding grant agreement or FFGA with the Federal Transit Administration on December 9 to construct a new Portal North Bridge – a $1.8 project to replace the current 110-year-old structure that has long suffered from mechanical issues, delaying NJ TRANSIT and Amtrak trains.

[Above graphic via Amtrak.]

Authorization of this agreement allows NJ TRANSIT, with the assistance of Amtrak, to construct, operate, and maintain a new Portal North Bridge and 2.44 miles of related railroad infrastructure.

“Since taking office, one of my top priorities has been to secure funding for key infrastructure projects that will carry our commuters and our economy forward,” said Gov. Murphy in a statement.

“I’m thrilled by the Board’s decision today to green light this agreement, which moves us one step closer to replacing this unreliable, century-old bridge that has threatened to grind the Northeast Corridor to a halt and been a source of untold stress for thousands of riders who rely on it,” he added. “New Jersey has put our skin in the game with more than our fair share of funding, and I look forward to working with the Federal Transit Administration to get this shovel-ready project started.”

“The Portal North Bridge replacement is one of the most important infrastructure projects we are undertaking to improve service reliability and safety for NJ TRANSIT and Amtrak customers,” added Diane Gutierrez-Scaccetti, commissioner of the New Jersey Department of Transportation and chair of the NJ TRANSIT board. “[This] board action is a critical step to finalizing the federal grant agreement and beginning construction.”

The replacement bridge – to be preliminarily owned by NJ TRANSIT and maintained by Amtrak – is designed as a high-level, fixed span bridge that will allow marine traffic to pass underneath without interrupting rail traffic. Once full construction begins, the project should take five years to complete.

Meanwhile, the renovation of New Jersey’s Newark Penn Station – opened in 1935 and now the seventh busiest rail station in North America – will begin immediately, with $30 million in renovations and restorations. Additional upgrades scheduled over the next five years will comprise the remaining $160 million worth of state investment, the governor said.

“[Newark] Penn Station is a vital hub not just for those heading to New York City each day, but it is also a gateway to Newark and the resurgence that has taken place here over the past two decades,” noted Gov. Murphy in a separate statement. “We are thrilled to announce these renovations, which, when completed, will help restore this historic station to its former glory.”

The first phase of renovations will focus on “aesthetics” such as restoration of the classic benches in the waiting room, installation of brighter lighting, updating of the bathrooms, improved heating-ventilation-air conditioning and air-handling systems, fresh paint and tile, and a deep clean of the limestone exterior.

In the station’s bus lanes, upgrades include new lighting and improved drainage along with improved directional and way-finding signage within the building to help make sense of this station’s labyrinth of platforms and hallways.

Longer-term enhancements include improving the station’s openness, light, and overall commuter and visitor experience. A future goal is to make Newark Penn Station more of a destination, with added dining and shopping in the concourse.

“Historic Newark Penn Station is one of our region’s busiest and most vital transportation hubs serving NJ TRANSIT rail, bus and light rail customers, as well as Amtrak and PATH [Port Authority Trans-Hudson] trains,” added New Jersey DOT’s Gutierrez-Scaccetti. “It deserves this significant investment to see its grandeur restored, and at the same time we’ll be improving the overall customer experience at the station.”