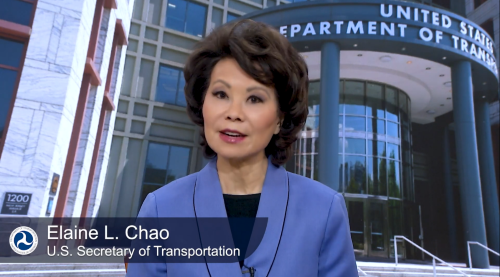 The U.S. Department of Transportation hosted a virtual seminar on December 8 highlighting ways the transportation industry as a whole can help combat human trafficking.

[Above image via USDOT.]

“America’s roadways, railways, airways, and waterways are being used to facilitate a modern-day form of slavery and the transportation sector plays a critical role in thwarting this terrible crime,” noted USDOT Secretary Elaine Chao in a video message during the seminar. “Working together, we can help save victims of these terrible crimes and prevent future crimes from taking place.”

John Cotton Richmond, who serves as Ambassador-at-Large and head of the Office to Monitor and Combat Trafficking in Persons at the U.S. Department of State, noted during the seminar that “the problems loom large – the challenges we face massive” in terms of combating human trafficking.

“The traffickers are relentless and the trauma can be overwhelming,” he explained. “However, many people are working on this issue in so many different ways and many angles [and] the USDOT is critical partner helping create modal strategies.”

To that end, the USDOT noted that its Advisory Committee on Human Trafficking Report  provides helpful tools and resources to guide transportation leaders in their counter-trafficking efforts.

Richmond added that the COVID-19 pandemic is acting as a “pivot point” as the transportation industry looks to the future at ways to combat trafficking. “The traffickers are trying to capitalize on this moment of chaos and find ways to increase profits from their victims,” he said.

Richmond also noted that transportation is “critical” to helping “traffickers carry out and sustain their operations. That is why we need greater awareness of the connections between trafficking operations and transportation systems and developing resources to thwart them.”

Joel Szabat, USDOT’s acting under secretary of transportation policy, noted that trafficking earns criminals $150 billion in global profits annually – making it “one of the most lucrative criminal enterprises that is low risk and hard to recognize.”

Nicole Nason, administrator of the Federal Highway Administrator, moderated a panel examining efforts by state and local agencies to combat human trafficking. Colonel Gene Spaulding, director of the Florida Highway Patrol, highlighted his state’s latest effort to combat human trafficking: the “Highway Heroes” campaign. It is a multi-media effort that will run through January 2021 aimed at educating commercial driver license holders across the state on how to identify victims and report suspected human trafficking.

“We know that Florida – with 21 million residents, 120 million visitors, plus thousands of miles of highways and roads – is a prime target for traffickers,” he said. “That’s why we want to train 500,000 truck drivers to help us spot human trafficking.”

State departments of transportation across the country have been assisting in anti-human trafficking efforts over the last two years.

“We’re developing more detailed training not only for our employees but for our contractors as well,” he said. “We’re hoping to spread awareness about this terrible crime wider within our section of the transportation industry.”