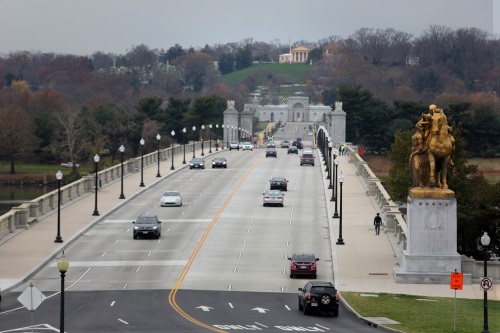 First opened to traffic in 1932, the neoclassical-designed Arlington Memorial Bridge carries an estimated 68,000 vehicles a day – making it one of the most important commuter bridges in the mid-Atlantic region, USDOT noted in a statement.

The Arlington Memorial Bridge project also served as a laboratory of sorts for a variety of construction techniques.

First, a “design-build” contract governed the renovation – meaning the contractor was responsible for both the design and construction of the repairs – which kept project costs to a minimum and shaved more than a year off construction time.

The National Park Service said in a statement that throughout construction it took “special care” to protect Arlington Memorial Bridge’s historic architecture while enhancing its iconic appearance. Since physical work began in fall 2018, construction workers methodically removed, cleaned, repaired and reinstalled more than 4,500 pieces of granite and rehabilitated the bridge’s historic structure.

In addition to completing Arlington Memorial Bridge’s first ever total rehabilitation, the NPS implemented recommendations from a safety study of Memorial Circle by repaving, improving crossings, adding new signs and making the area easier and safer for drivers, pedestrians and bicyclists to navigate.