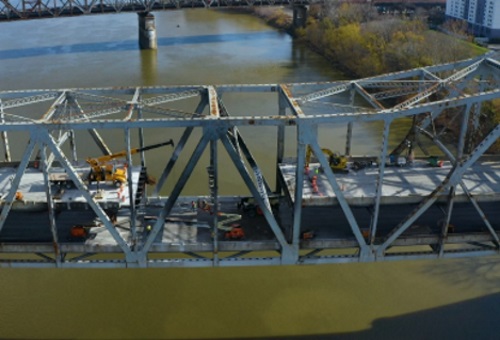 Repairs on the Brent Spence Bridge – closed since November 11 due to damage by a truck crash and resulting vehicle fire – are now “rounding third base” according to a recent update from the Kentucky Transportation Cabinet.

“We’re now past the midpoint of this project to repair and reopen the Brent Spence Bridge,” explained Jim Gray, KYTC secretary, in a statement. “We’ll be going from construction to completion in the next two weeks.”

Gray also issued a “reminder” that his official order redirecting traffic around the bridge – which carries Interstates 71 and 75 over the Ohio River and serves as the “linchpin” for a critical interstate travel and commerce corridor – remains in force until the bridge reopens.

That order provides for a single lane of I-71/75 to remain open north of the I-275 interchange to give passenger vehicles access to downtown Covington via 12th Street and 5th Street, as well as to commercial vehicles making local deliveries.

The target date for full re-opening of the Brent Spence Bridge is December 23.

“The Brent Spence was designed to carry approximately 80,000 to 100,000 vehicles per day; it [actually] carries twice that amount,” he said. “We appreciate the collaboration with our partners at the Ohio Department of Transportation as it relates to managing traffic during the closure as well as moving towards a new companion bridge that will provide additional capacity across the Ohio River.”