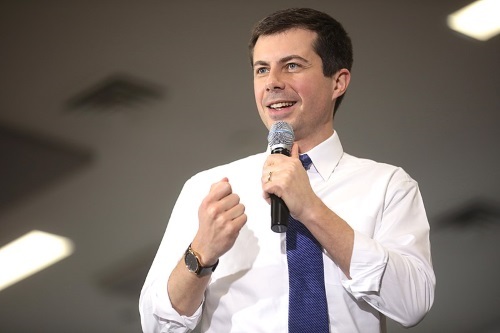 [Above photo by Gage Skidmore.]

First elected South Bend’s mayor at age 29 – in which he served for eight years – Buttigieg plans to implement President-elect Biden’s “Build Back Better” agenda, which includes rebuilding the nation’s infrastructure and imbuing it with more sustainability, creating millions of union jobs, and tackling the climate change via clean energy development.

“Mayor Pete Buttigieg is a patriot and a problem-solver who speaks to the best of who we are as a nation. I am nominating him for Secretary of Transportation because this position stands at the nexus of so many of the interlocking challenges and opportunities ahead of us,” the president-elect said in a statement.

“Jobs, infrastructure, equity, and climate all come together at [USDOT], the site of some of our most ambitious plans to build back better,” he noted. “I trust Mayor Pete to lead this work with focus, decency, and a bold vision — he will bring people together to get big things done.”

“One of the most important parts of building America back better is ushering in a safe, modern, and sustainable transportation system that helps us grow our economy, tackle our climate crisis, and connect all Americans to jobs and opportunity,” added Vice President-elect Kamala Harris. “Mayor Pete Buttigieg is an outstanding choice to help spearhead this work.”

Jim Tymon, executive director of the American Association of State Highway and Transportation Officials, congratulated Buttigieg on his nomination to be USDOT secretary.

“Buttigieg understands the vital role that transportation plays in people’s lives,” Tymon said in a statement.

“AASHTO’s membership –the hardworking public servants at every state department of transportation in the country – are appreciative of the secretary-designee’s call for robust investment in our multimodal transportation system and his commitment to improving transportation safety,” he said.

“We look forward to working with him and the administration of President-elect Joe Biden to deliver an integrated, efficient, and innovative national transportation system,” Tymon added.