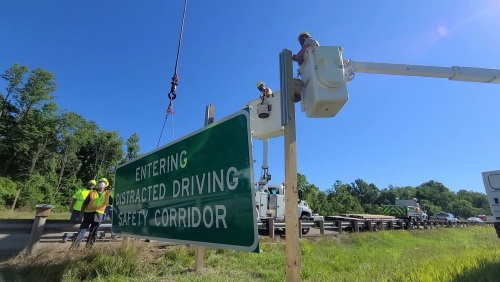 The Ohio Department of Transportation noted that traffic crashes involving injuries and fatalities are down in the Belmont County Distracted Driving Safety Corridor it launched with the Ohio State Highway Patrol in August 2020.

The agency said in a statement that only eight crashes involved injuries or fatalities occurred in that corridor between August and December 2020; down from 25 during the same time period in 2019. Meanwhile, traffic volumes are only down 2 percent between August and mid-December 2020 compared to 2019, the Ohio DOT added.

Meanwhile, in September 2020, Governor Mike DeWine (R) created the Ohio Traffic Safety Council – led by the Ohio Department of Public Safety – to coordinate and monitor all statewide traffic safety initiatives, analyze trends, and advise his office on how to create safer roads through education, enforcement, engineering, and emergency response.

“Members of this council all share the same goal – to drive down the number of people killed in traffic crashes,” the governor noted in a statement. “Their combined expertise, resources, and efforts will be a force multiplier in saving lives.”

Jack Marchbanks, Ohio DOT director and one of the council’s 27 members, said during a press conference at the time that, “what we’re about is improving safety, to make Ohio safer when people are traveling on its roadways.”