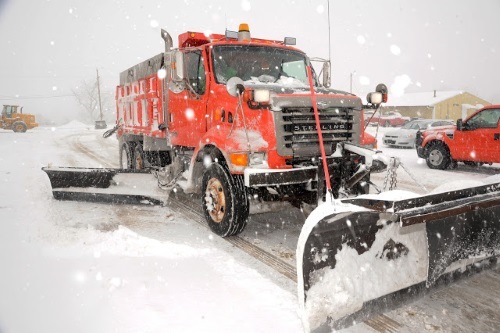 There are several reasons why snowplow trucks must travel at slow speeds during winter operations, according to the Kansas Department of Transportation – and safety is at the top of the list.

The agency said its snowplow trucks – which typically weigh around 26,300 pounds unloaded, which is more than five times the weight of the average passenger vehicle – travel below normal highway speeds so operators can maintain control in slippery conditions. Their speed can drop as low as 10 miles per hour in blizzard conditions, the Kansas DOT added.

Brent Terstriep, district five engineer for the agency, emphasized in a statement that motorists should give snowplows a wide berth on the highway – staying back by 100 feet or more. That’s because the beet juice and brine mixture they spray to melt snow and ice off the roads can stick to other vehicles if they come too close to the plow truck.

“Depending on the storm, we may be pretreating the entire road section, or we may only treat structures, like culverts or bridges,” he said. “When we spot treat, especially over a culvert, [it] is not extremely apparent to the motorist. They may get a surprise when the liquid is turned on.”

The Kansas DOT added that it sometimes uses a 10 percent beet juice mixed with brine as the juice helps the brine stick to pavement to better melt ice or prevent it from forming, especially on elevated or exposed areas prone to freezing.

In addition, the agency noted that if its snowplow trucks go much over 30 mph when dropping salt, much of it could bounce off the roadway.

Finally, the Kansas DOT pointed out that motorists should be extra careful when passing snowplow trucks as they might not see a wing plow jutting out seven feet from the side of the plow truck because of blowing snow or limited visibility.

“The most important thing to us is that everyone gets home safely – the traveling public and our people,” emphasized David Lechner, Wichita area superintendent for the Kansas DOT. “So we ask that you be alert and understand the speeds at which we have to work.”