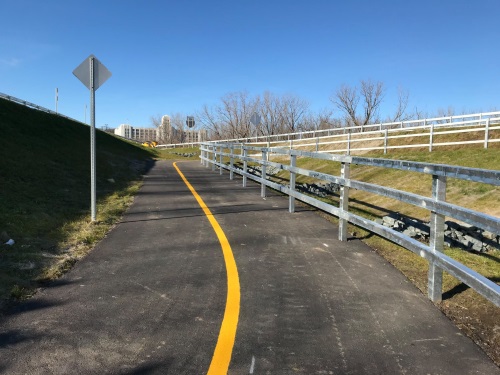 The Empire State Trail will be open year-round, including winter, and connects 20 regional trails to create a continuous statewide signed route.

For its part, the NYSDOT improved 170 miles of on-road bicycle route sections to enhance safety and travel on low-speed rural roadways and city streets when possible. The agency also helped install 45 gateways and trailheads along the route to welcome visitors and branded the trail with signage, interpretive panels, bike racks, and benches.

“Nearly four years ago, we announced plans to build the Empire State Trail and I am excited to announce it’s been completed on time,” explained New York Governor Andrews Cuomo (D) in a statement – adding that the trail should attract 8.6 million residents and tourists annually.

“There’s no trail like it in the nation,” he said. “Not only does it provide an opportunity to experience the natural beauty and history of New York, but it also gives New Yorkers from every corner of the state a safe outlet for recreation as we continue to grapple with the COVID-19 pandemic.”

“Completion of the 750-mile Empire State Trail is a truly historic achievement for New York State that demonstrates the intricate connection between investments in transportation infrastructure and the vitality of our communities,” she said.

“This breathtaking trail will allow countless generations of New Yorkers and visitors to explore the world-renowned natural wonders and beauty of the Empire State and provide unparalleled recreational access to users of all ages and abilities – all while promoting environmental responsibility, tourism and economic development,” Dominguez added.