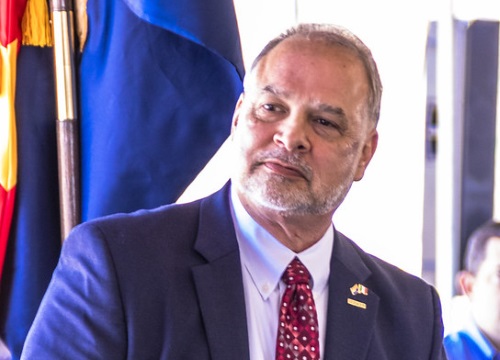 For his ongoing work in support of economic growth along the Arizona-Mexico border, the Nogales Santa Cruz Port Authority recently presented John Halikowski (seen above), director of the Arizona Department of Transportation, with its ‘Friend of the Border’ award.

Previous award recipients include the late Will Brooks, director of field operations for the Customs and Border Protection agency, and Consul General Virginia Staab of the U.S. Consulate in Nogales, Sonora.

The port authority said Halikowski received its ‘Friend of the Border’ award for his efforts to help strengthen the regional economy, improve international trade, promote tourism, and foster community development by making international ports of entry and surrounding areas “efficient and effective.”

Those efforts include the $134 million project overseen by the Arizona DOT to improve mobility and safety along a 3.75-mile stretch of Nogales highway – also known as State Route 189 – as well as increase international trade coming through Nogales by linking the Mariposa Port of Entry and Interstate 19.

“Under Director Halikowski’s leadership, the Arizona DOT has implemented programs to complement the growth of existing and new industries,” explained Jaime Chamberlain, the port authority’s chairman. “The Arizona DOT has invested millions of dollars in new infrastructure projects to make our traffic volume along our most congested state routes as safe and efficient as possible.”

“The ‘Friend of the Border’ award is a great honor,” Halikowski noted in a statement.

“Arizona DOT is grateful for a strong partnership with the Port Authority and appreciates the opportunity to work with so many outstanding community partners in Nogales and surrounding communities,” he said. “This award truly demonstrates the value of strong public-private partnerships and [the] vision for a safe and reliable connection between Arizona and Mexico to support trade and commerce.”