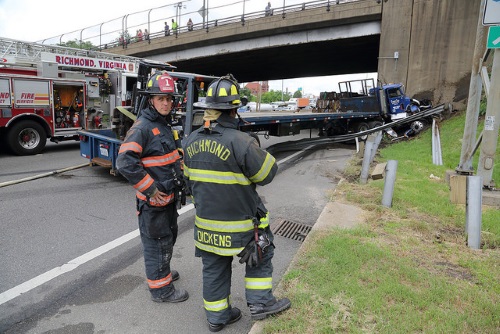 The Governors Highway Safety Association noted on January 13 that an uptick in traffic fatalities during the third quarter of 2020, despite a decline in vehicle miles traveled or VMT, is a “troubling trend” as traffic volumes return to normal.

[Above photo by Tom Saunders for the Virginia DOT.]

Early estimates issued by the National Highway Traffic Safety Administration indicate that 11,260 people died on U.S. roadways in the third quarter of 2020: a 13.1 percent increase compared to the same period in 2019.

“We can’t afford to compound the staggering loss of life from COVID-19 with additional preventable deaths caused by unsafe driving behaviors like speeding, driving under the influence or distracted and not wearing a seat belt,” noted Jonathan Adkins, GHSA’s executive director, in a statement.

“The vaccine for unsafe driving is available to every American right now – slow down, buckle up, stow your phone and never drive impaired,” he said. “If we don’t inoculate ourselves against these dangerous driving habits, a lasting impact of this pandemic will be even more traffic deaths – an unacceptable outcome.”

Chausmer is one of the nation’s preeminent child passenger safety experts with more than 25 years of experience planning, implementing and evaluating injury prevention programs and managing national grants. She comes to GHSA after a 16-year career at Safe Kids Worldwide where she implemented and managed the gold-standard National Child Passenger Safety Technician Certification Program.

Snider joins GHSA after more than a decade as a journalist with Politico and Bloomberg BNA and more recently as a public affairs official with the American Association of Airport Executives and the Electrification Coalition. While at Politico, he launched the publication’s popular Morning Transportation newsletter, which covers Congress and the transportation sector.