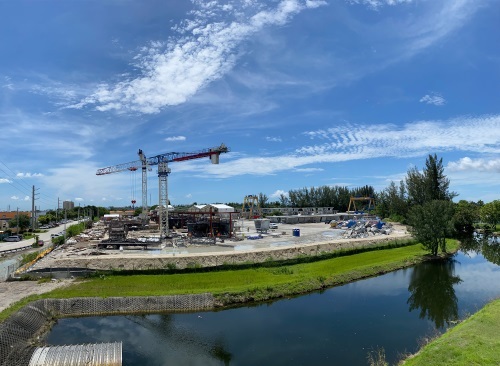 Recent reports released by the U.S. Chamber of Commerce, American Society of Civil Engineers (ASCE), and Florida Department of Transportation illustrate the critical role transportation infrastructure investment will play in helping the U.S. economy recover from the COVID-19 pandemic.

[Above photo by the Florida DOT.]

In his annual State of American Business speech on January 12, Thomas Donohue – CEO of the U.S. Chamber of Commerce – outlined the path for a widespread economic recovery through infrastructure investments, workforce “re-skilling,” immigration reforms, and re-invigoration  of America’s global competitiveness. Additionally, he warned that excessive regulations and anti-competitive taxes would undermine the recovery.

“Our lawmakers should enact a fiscally and environmentally responsible infrastructure package that focuses on urgent needs like roads and bridges, modernizes our critical networks, and upgrades and expands technology like broadband,” Donohue explained in his speech, noting that such a package is the “one way to raise productivity, create jobs, and drive up incomes in a hurry.”

“Ten months after COVID-19 caused an unprecedented disruption in economic activity, some industries have fully recovered while others are in the equivalent of a depression,” added Neil Bradley, the Chamber’s executive vice president and chief policy officer, in a separate statement.

“The full reopening of the economy that widespread vaccinations will make possible offers a light at the end of the tunnel, but we will be dealing with the fallout from the pandemic for years to come,” he explained. “As we rally for recovery, it is critical that policymakers pursue pro-growth policies that can help business, families, and communities fully recover.”

To that end, the U.S. Chamber of Commerce and the Bipartisan Policy Center, along with more than 140 national and local organizations, including AASHTO, launched the Build by the Fourth of July infrastructure campaign on January 14. That effort aims to convince newly elected and re-elected members of Congress to enact a fiscally and environmentally responsible infrastructure package by the July 4, 2021.

The ASCE highlighted the importance of infrastructure to the U.S. economic recovery in a report released January 12 entitled Failure to Act: Economic Impacts of Status Quo Investment Across Infrastructure Systems. ASCE said its report quantifies how “persistent failure to invest in our aging infrastructure” affects the U.S. economy, including gross domestic product, jobs, personal disposable income, and business sales.

The group found that with an increased investment of $281 billion a year the U.S. can “eliminate this drag on the economy.”

A key focus of ACSE’s report is the fallout from a lack of surface transportation funding, with preliminary findings showing that losses to households and industries would amount to $677 billion over the 2020–2029 period and $1.5 trillion during the 2030–2039 decade, the group said.

By contrast, the Florida DOT’s 39-page macroeconomic analysis found that the state’s transportation projects should yield an average $4 of benefits for every dollar invested in all transportation modes, including highway, transit, rail, airports, seaports and waterways, and spaceports.

The Florida DOT also determined via its analysis that the $4 return per transportation infrastructure dollar invested held steady despite the impact of the COVID-19 pandemic – reinforcing the durable nature of economic gains of transportation system investments.

“Investing in transportation is key as we plan for our state’s future,” explained Kevin Thibault, Florida DOT secretary, in a statement. “The department is proud to make vital investments in Florida’s transportation system that will create essential jobs, provide long-term economic benefits, and keep Florida moving for decades to come.”