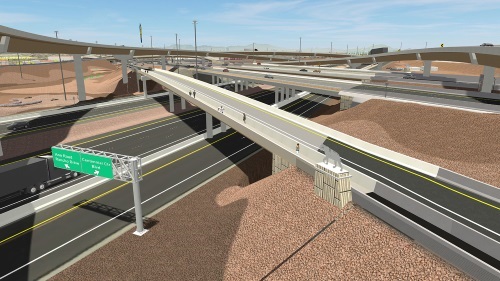 The Nevada Department of Transportation started work on the final $155 million phase of the Centennial Bowl interchange project where U.S. Highway 95 meets the 215 Beltway in northwest Las Vegas on January 11.

[Above graphic via the Nevada DOT.]

The project will build-out the remaining three ramps needed to finish the system-to-system interchange that initially began construction in 2015.

“This interchange will enhance traffic, mobility and motorist safety while establishing a new gateway for the Centennial area,” explained Kristina Swallow, Nevada DOT’s director, in a statement. “Currently, over 107,500 vehicles daily travel the ramps and freeways at U.S. 95 and the 215 Beltway, and it’s only expected to grow in the future.”

The project is also adding a multi-use recreational trail along the north side of the 215 Beltway from Grand Montecito Parkway to Tenaya Way along with several miles of new bike lanes and sidewalks.

Upon completion in early 2024, the Centennial Bowl will be one of the state’s largest interchanges with 20 total bridges over three decks.