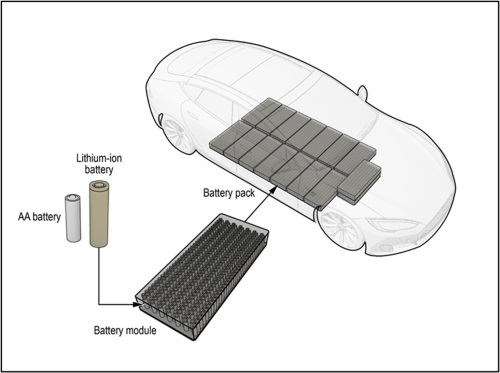 [Above graphic by the NTSB.}

Those findings are contained in Safety Report 20/01, which documents the agency’s investigation of four such EV fires.

In three of those cases, the lithium-ion batteries ignited after being damaged in high-speed, high-severity crashes, NTSB said, with the fourth lithium-ion battery fire occurred during normal vehicle operations.

All three of the crash-damaged batteries reignited after firefighters initially extinguished the vehicle fires, the agency noted, while the battery pack in the fourth investigation did not reignite.

“A further risk is that damaged cells in the battery can experience thermal runaway – uncontrolled increases in temperature and pressure – which can lead to battery re-ignition,” the agency added. “The risks of electric shock and battery re-ignition/fire arise from the ‘stranded’ energy that remains in a damaged battery.”

The agency’s safety recommendations include: