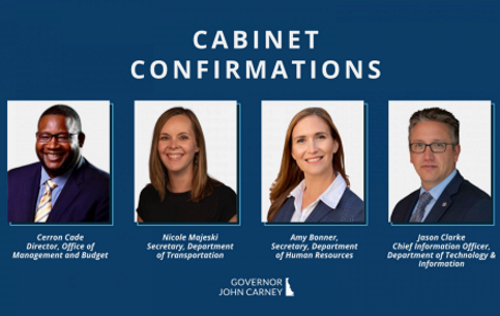 The Delaware state senate confirmed Nicole Majeski as secretary of the Delaware Department of Transportation on January 13.

[Above image via the Delaware Governor’s Office.]

Governor John Carney (D) nominated Majeski – who served as the deputy secretary for Delaware DOT since 2011 – to be the agency’s secretary following the retirement of Jennifer Cohan in October 2020.

Majeski (at right) – a graduate of the University of Delaware – previously worked for New Castle County government, serving as chief of staff to then-County Executive Chris Coons, who is now one of the state’s two U.S. senators.

Majeski is one of four of the governor’s cabinet positions confirmed by the state senate.

“I want to thank members of the Delaware Senate for their thoughtful consideration of these important Cabinet nominations,” said Governor Carney in a statement.

“This is a group driven by public service. Their experience, good judgment, and commitment to Delaware will serve our state well,” he added. “Our goals are simple. We want to rebuild from the COVID-19 crisis and make Delaware an even better place to live, work, and raise a family. Working together, I firmly believe Delaware will come out of this difficult period stronger than ever.”