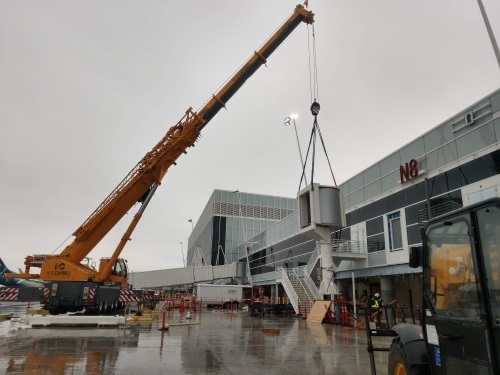 New report by the Airports Council International–North America trade association indicates U.S. airports will lose at least $17 billion between April 2021 and March 2022 due of the prolonged decline in commercial aviation traffic resulting from the COVID-19 pandemic.

[Above photo by the Seattle-Tacoma Airport.]

Those losses are in addition to the $23 billion U.S. airports are expected to lose between March 2020 and March 2021.

“The ongoing global pandemic continues to severely impact the finances of U.S. airports,” explained Kevin Burke, ACI’s president and CEO, in a statement. “After a very difficult 2020, our airports still face significant revenue losses for the foreseeable future due to the steep, prolonged downturn in passenger traffic.”

Burke added that those “mounting losses,” coupled with increased operational costs, would impede airports from investing in much-needed infrastructure projects at a time when they continue to foot the bill for extensive facility upgrades and enhanced health and safety practices to limit the spread of COVID.

“Airports greatly appreciate the federal aid they have received so far, which has saved thousands of jobs,” he said. “[But this] economic report shows they will need additional federal assistance to get through this crisis.”

ACI’s report noted that, in 2020, airline passenger traffic dropped approximately 65 percent from pre-pandemic projections and that current estimates predict passenger traffic in 2021 will be roughly 40 percent lower than pre-pandemic projections. In total, U.S. airports will see more than a billion fewer passengers in the two-year 2020-2021 period because of the pandemic, the report noted.

Additionally, the report noted that the debt burden of U.S. airports has been steadily increasing for 20 years – reaching close to $107 billion at the end of fiscal year 2019. U.S. airports are on the hook to pay approximately $16 billion to service that debt for FY 2020 and 2021, regardless of traffic volume or revenue – creating cash flow concerns that could significantly constrain their ability to fund capacity improvements to plan for long-term future growth, ACI noted.

This comes at a time when research by state departments of transportation indicate that airports serve as critical “economic engines” for regions across the country.

The Aeronautics Bureau within the Alabama Department of Transportation plans to release a full report on February 15 how the state’s 80 public airports generate over $4.9 billion in state economic activity each year, support 44,399 jobs and $1.9 billion in payroll. Additionally, they generate almost $268 million in tax revenues to support local communities.

That report – released by the North Carolina Department of Transportation’s Division of Aviation – also found that, based on 2019 data, that airports and aviation-related jobs provide $15 billion in personal income and contribute $2.5 billion in state and local tax revenues every year.