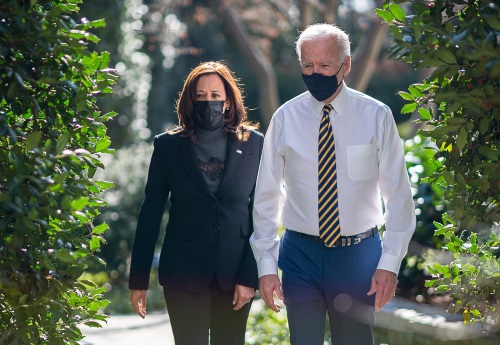 “We’re talking about national security and America leading the world in a clean energy future,” President Biden noted in remarks made before signing that executive order.

“The federal government owns and maintains an enormous fleet of vehicles, as you all know,” he said. “With today’s executive order, combined with the Buy American executive order, we’re going to harness the purchasing power of the federal government to buy clean, zero-emission vehicles that are made and sourced by union workers right here in America.”

That includes installing 500,000 new electric vehicle charging stations across the country to “modernize” the nation’s highway systems to “adapt to the changes that have already taken place,” as more American consumers switch to electric vehicles through rebates and incentives.

According to the General Services Administration, the federal government operated 645,000 vehicles in 2019 — with about one-third of them used by the U.S. Post Office. Those vehicles accumulated 4.5 billion miles in 2019, consuming 375 million gallons of gasoline, the agency added.

Purchasing electric vehicles or EVs would largely achieve the wholesale changeover to ZEVs by the federal government. Yet broader use of EVs could affect traditional transportation funding streams, especially where motor fuel taxes are concerned.

During the question-and-answer portion of that hearing, Buttigieg said the “current state of the Highway Trust Fund is that there’s more going out than coming in, and up until now that’s been addressed with general funding transfers. In the long term, we need to bear in mind that as vehicles become more efficient and we pursue electrification, sooner or later there will be questions about whether the gas tax can be effective at all.”

He added later that, “if we’re committed to the idea of user pays, part of how you might do that would be based on vehicle miles traveled. But that raises concerns about privacy and there remain technical issues as well. It’s going to have to be a conversation not only in the administration but with Congress too.”

Switching from a tax of motor fuels to a vehicle miles traveled or VMT tax – as well as a fee levied on alternative fueled vehicles, including EVs –has been discussed previously in Congress.

In 2019, Sen. John Barrasso, R-Wyo., and Rep. Jason Smith, R-Mo., re-introduced legislation – the Fairness for Every Driver Act – to end electric vehicle federal tax credits while imposing a fee on operators of all alternatively fueled vehicles — including those powered by electricity, natural gas, and hydrogen, — to be paid into the Highway Trust Fund.

“This legislation levels the playing field for all cars across America,” noted Sen. Barrasso at the time. “Gas, electric, and alternative fuel vehicles all use the same roads and put the same amount of wear and tear on those roads. Every driver should contribute to maintain America’s highways.”