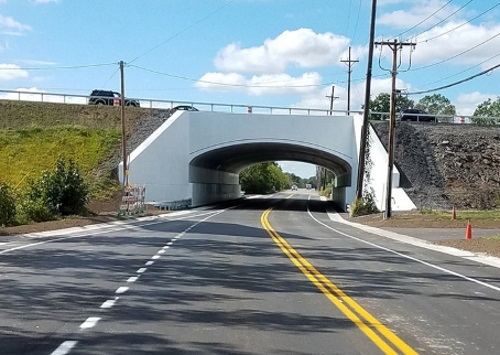 Three state departments of transportation – in New York, Massachusetts, and New Jersey – are helping disburse funding in support of a wide variety of local transportation projects, from bridge and road repair to transit service.

[Above photo of the Trolley Boulevard Bridge by the NYSDOT.]

“Aggressive investments in transportation infrastructure are crucial for our state’s long-term competitiveness and sustainability,” explained NYSDOT Commissioner Marie Therese Dominguez in a statement. “The funding being made available under the BRIDGE NY initiative will serve to make our State’s communities more environmentally and economically resilient.”

“New York State and communities around the world are increasingly contending with extreme weather events driven by climate change, and it’s vital that we fortify our community infrastructure to be resilient to those changes,” added Governor Andrew Cuomo (D).

“This newly-available BRIDGE NY funding provides communities statewide with the technical and financial support necessary to harden locally owned bridges and culverts, which will not only enhance their safety and reliability, but will facilitate regional and global economic competitiveness.”

The Massachusetts Department of Transportation is taking a broader approach to municipal infrastructure funding support. The agency plans to distribute $200 million in Chapter 90 funding to help the state’s 351 cities and towns improve transportation infrastructure and address needs within their local communities pending approval of a fiscal request by Governor Charlie Baker (R) to the state legislature.

“Investing in local roads and bridges helps connect residents with jobs and opportunities across the Commonwealth, and promotes economic growth and development,” the governor explained in a statement. “We are pleased to continue providing support and resources to cities and towns throughout Massachusetts, and ensuring municipalities have the flexibility and resources to address their unique needs.”

“Chapter 90 funding helps cities and towns meet important needs ranging from road paving projects to sidewalk repairs to pedestrian and bicycle facilities to other infrastructure improvements,” noted Stephanie Pollack, the Massachusetts DOT’s former secretary and CEO, who is leaving the agency to become deputy administrator of the Federal Highway Administration.

She noted that, via the Chapter 90 program, the Massachusetts DOT reimburses cities and towns for costs incurred for eligible transportation projects – awarding funds by municipality via a pre-determined formula that includes factors such as population, road miles, and employment.

The first provides a total of $1 million in fiscal year 2021 Transit Village grants to help four municipalities advance a range of transportation projects.

The agency noted that this particular program is a multi-agency smart growth initiative, in which municipalities that have transit facilities within their borders can seek designation as a “Transit Village” by developing plans for dense, mixed-use redevelopment that includes housing near their transit facility – be it commuter rail, bus, ferry, or light rail.

The New Jersey DOT added in a statement that this initiative creates incentives to revitalize areas around transit stations in order to create “attractive, vibrant, pedestrian-friendly neighborhoods where people can live, shop, work and play without relying on automobiles.”

The second New Jersey DOT local funding effort disbursed $1 million via its Bikeway Grant Program to support five municipal programs to promote bikeways as an alternate mode of transportation as part of the state’s goal of achieving 1,000 new miles of dedicated bikeways in New Jersey.

“Transportation infrastructure is more than just roads and bridges. Investing in bikeways encourages people to consider alternate forms of public transportation,” noted Diane Gutierrez-Scaccetti, New Jersey DOT commissioner, in a statement. “It is part of our effort to spur community and economic growth and improve the quality of life for all New Jersey’s residents and visitors.”