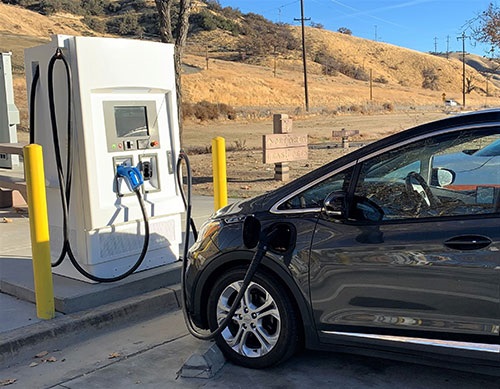 The California Department of Transportation recently finished installation of 22 new “fast-charging” stations for electric vehicles or EVs at nine locations along the state’s highway network.

“Expanding the availability of convenient fast-charging stations along state highways is significant for the future of California transportation.”

The agency said the 22 Level 3 DC fast chargers deployed as part of this $4.5 million project provide an approximate 80 percent charge in 30 minutes to EVs with fast-charging capability. The units also feature “universal connectors” so they can re-charge all EVs on the market, including Teslas, with an adapter. Charging is free with no time limit, Caltrans added.

“This project is a tremendous example of how public agencies can collaborate with the private sector to fill gaps in the zero emission vehicle (ZEV) market,” said Tyson Eckerle, deputy director of ZEV market development for the Office of Business and Economic Development within the administration of Governor Gavin Newsom (D). “More chargers throughout the state will help to incentivize the purchase of EVs, getting us closer to Governor Newsom’s goal of 100 percent ZEV sales by 2035.”

Meanwhile, the Caltrans fast-charger deployment effort comes on the heels of a Biden-Harris administration executive order mandating that the federal government buy ZEVs for its fleet.

“We’re talking about national security and America leading the world in a clean energy future,” President Biden noted in remarks made before signing that executive order.

“The federal government owns and maintains an enormous fleet of vehicles, as you all know,” he said. “With today’s executive order, combined with the Buy American executive order, we’re going to harness the purchasing power of the federal government to buy clean, zero-emission vehicles that are made and sourced by union workers right here in America.”

The Biden-Harris executive order also coincides with a 63-page report recently released by the Center for Transportation and the Environment to provide suggestions for expanding the adoption of zero-emission buses in the U.S. transit industry.

That report – entitled Transit Vehicle Innovation Deployment Centers/TVIDC Advisory Panel Overview and Conclusions and published by the Federal Transit Administration – is the culmination of discussions held by the CTE-led advisory panel between the zero-emission industry and transit agency leaders and advocacy groups.