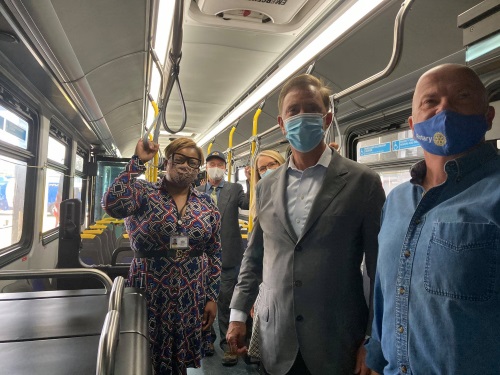 In his “State of the State” address on February 10, Connecticut Governor Ned Lamont (D) (in the middle of the photo above) proposed implementing a tractor-trailer mileage-based fee to generate an estimated $90 million annually for the state’s transportation fund.

“As for our transportation infrastructure and funding, if the thinking had been, ‘If it ain’t broke, don’t fix it,’ then that thinking needs to change,” Gov. Lamont said in his remarks.

“The current state of our transportation fund keeps us from accessing these federal funds and risks our ability to fund infrastructure projects we desperately need to revitalize our economy,” he explained. “The Special Transportation Fund is broken and it needs to be fixed. So, I will propose two new sources of revenue that, combined, sustainably fund investments in Connecticut’s transportation future.”

The governor’s first proposal is for Connecticut to join the multi-state Transportation Climate Initiative with neighboring states like Rhode Island and Massachusetts. Joining the TCI “will reduce carbon emissions while raising over $80 million for climate change and public transit investment throughout our state,” Gov. Lamont said.

His second proposal is to implement a tractor-trailer mileage-based fee.

“The mileage fee would raise $90 million annually and apply only to those larger heavy-weight trucks, which can cause the vast majority of the damage to our highways,” the governor said.

“Mayor Pete, our new transportation secretary [Pete Buttigieg], as well as top Republicans in Washington support this approach to funding transportation investments,” he added. “This funding allows Connecticut to leverage for $1 billion worth of projects over the next five years.”

Gov. Lamont said those two proposed funding measures would enable Connecticut to “maintain our [transportation] project schedule to keep or bring our roads and bridges up to a state of good repair and speed up your commute.”